To the north of A484 and south of the Cemetery stands an early Iron Age settlement which dates from around 500 BC – known as Y GAER. 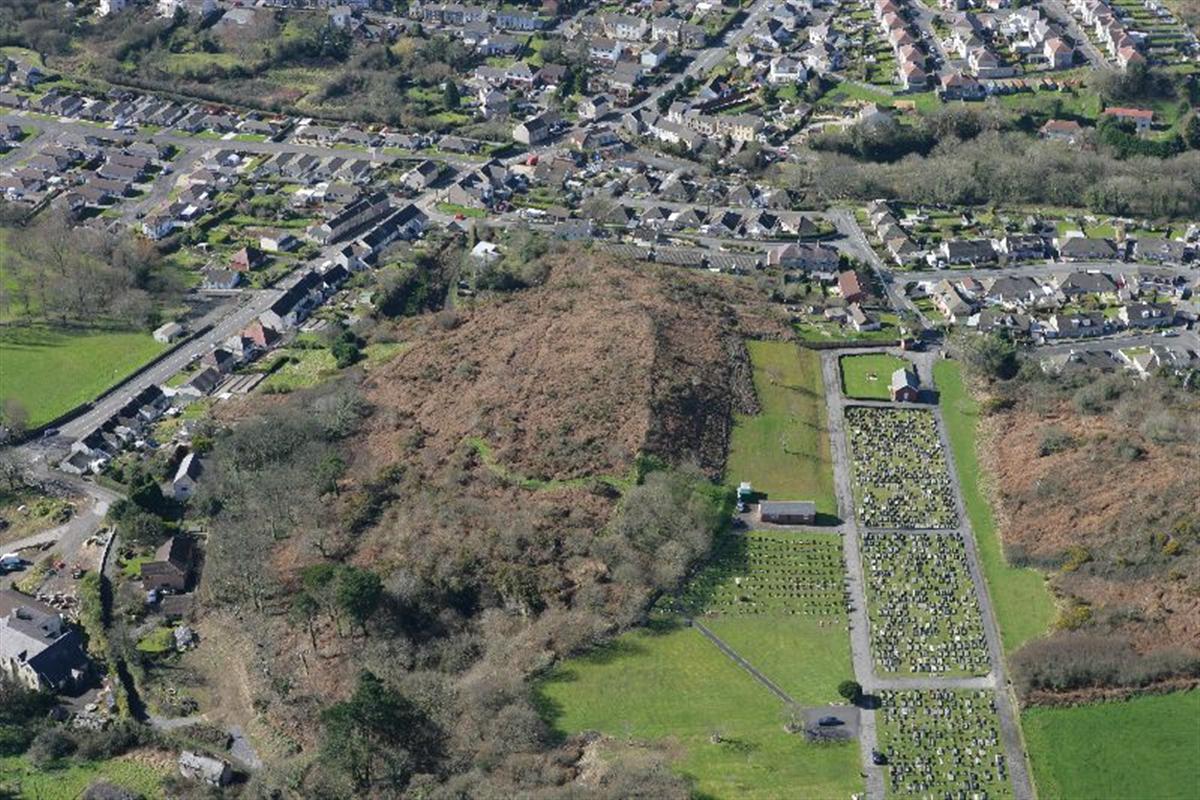 Y GAER       With permission – Crown Copyright: Royal Commission on the Ancient and Historical Monuments of Wales

Coflein, the online database for the National Monuments Record of Wales (NMRW) describes the site as follows:
‘Y Gaer is a small, partly-bivallate hillfort (i.e. a double circuit of defensive earthworks) of no great strength occupying a small, flat-topped knoll overlooked from the north; the banks enclose an area measuring some 135m north-north-east to south-south-west by 40m wide. The north side is weakly defended but the steep south side is defended by a double scarp (steep bank or slope) with a wide, flat berm (strip of land) giving the impression of a cultivation terrace. There is indeterminate scarping on the east and west and the outer bank and north-east entrance have been quarried away.’ 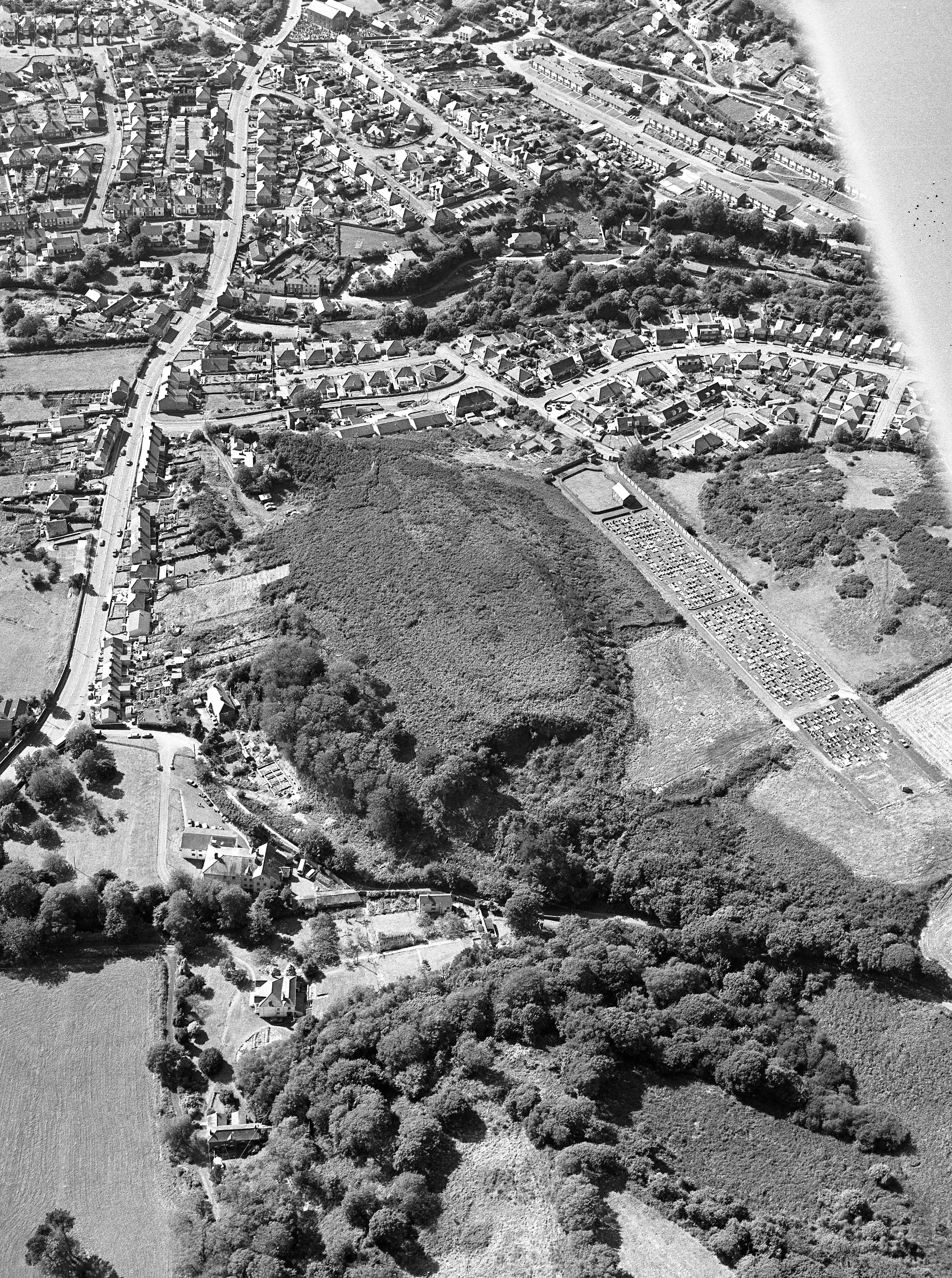 Surveyed by Dyfed Archaeological Trust in 2007 it is described as ‘ a large defended enclosure situated on a hilltop 60m above sea level….to the south and west the ground falls away sharply, but more gently to the north…. A portion of the eastern end of the enclosure has been removed by quarrying’. As it was in 2007 the site is overgrown with bracken, gorse and ferns and access is difficult.
It is estimated that between 600 and 1,000 hill forts were built in the whole of Wales.

There are two other fortified enclosures just to the west of Y Gaer on Pembrey mountain.

These are Garreg Lwyd and the Court Wood Enclosure

Garreg Lwyd was excavated in 1977 by George Williams for Dyfed Archaeological Trust. Coflein, describes the site as follows:
‘.. an oval earthwork enclosure, about 100m north-east to south-west by 84m, resting on steep natural slopes to the north and west; elsewhere defined by two lines of ramparts. It is largely reduced to scarps, having a south-facing entrance.’

The site had suffered considerable erosion and probably had more than one phase. Williams found the inner rampart surviving as an outer scarp, maximum 3ft in height, and the outer rampart as a steep outer scarp with a back slope on the east accompanied by the rear ditch. There were no traces of internal structures and the summit platform seems to be the most likely place flat enough to take any buildings.

Ancient Monuments UK, based on Cadw as a source, has this description: ‘The monument comprises the remains of an earthwork enclosure which probably dates to the Iron Age period (c. 800 BC – AD 74, the Roman conquest of Wales). It occupies a low knoll on a hill close to the sea with wide views to the south west (including PRN 1645). A single bank and ditch encloses the knoll (an area of 0.25ha.) with an additional length of bank and internal ditch running tangentially to the main body of the enclosure on the north-west. The enclosure rampart bank has an inner height of 1-1.4m and an exterior height of 2-2.5m, and the ditch is traceable, especially to the east and north.’

The enclosure and cultivation terraces were part of the Dyfed Archaeological Trust 1977 excavations. Some interesting finds here include flints, fragments of both early iron age pottery and Romano-British pottery, cinder and slag, and charred grain (carbon dating = 335BC). The Pembrey charred grain is a distinctive composition, described as ‘large well-formed prime grain’. It is suggested that this quality grain would have been prepared for consumption by roasting over an open fire. “Eating the grain in roasted form would thus have offered a convenient and useful means of making good use of the ‘tail end of the harvest’ here in this damp corner of south-west Britain.” (Appendix of ‘Survey and Excavation on Pembrey Mountain’ written by Gordon Hillman).

Enclosures of the Y Gaer type were situated on defensible hill tops and consisted of an earth bank made largely from material from digging the outer ditch. Hillforts could vary in size from fifteen acres to less than two and a half acres. Changes in climate, rising population and competition for good land are reasons given for a more warlike atmosphere developing and hence the need for more secure settlements.
There would have been local hierarchy with a chief at its head with power to force others into doing more menial tasks. The possession of luxury goods such as gold jewellery, fine crafted swords and rich clothing were marks of a powerful chief. Broken sherds of Mediterranean pottery found in some hill forts are evidence of a sophisticated society with trade links with Europe.

Inside the hill fort were secure folds for cattle, sheep, pigs and goats. Cattle especially denoted wealth and power. The hillfort might contain buildings, some made of timber, stone or wattle and mud used for housing, storage, or sacred ritual. Items found at such sites include swords, spear heads and sickles. Quern stones, spindles and looms for weaving wool and flax, as well as evidence of skilled craft workers have also been excavated.

The role of hill forts in Iron Age society was largely defensive. Some suggest that they were permanently occupied settlements with, as has been described, courts with chieftains having status and power. Others suggest that, as seems to be mostly the case in this part of Wales, they were single farms occupied by small or large family groups. They could also have been temporary refuges in time of conflict after which people would return to their fertile lowland farm.

Before the Roman invasion Wales was inhabited by four Celtic tribes
• Deceangli – inhabiting the north of Wales, they fought fiercely against the Romans and were led by the Druids. But they were finally defeated in a bloody battle on Anglesey in 60 AD when the Druids were butchered and their sacred groves were destroyed.
• Ordovices – inhabited mid Wales. It was here that Caractacus, Celtic king of the Caturellauni tribe fled after his defeat at the Battle of the Medway (43 AD). He came to rally the Ordovices and Silurian tribes in a vain attempt to defeat the Romans. Betrayed by his wife he was taken a captive to Rome in 51 AD.
• Demetae – inhabited the extreme west of Wales.
• Silures – inhabited most of south Wales including Carmarthenshire.

Four Things You Might Not Know About the Celts

1. They invented the process of soap making using animal fat and plant ashes.
2. They had macs. Their cloaks were waterproofed by oiling them with grease from sheep’s wool.
3. They dieted. If a man’s belly exceeded the standard length of a girdle he was fined.
4. They were feminists. Women chose their own husbands, owned and inherited property, and children took their mother’s name. Women fought alongside men and could rise to powerful positions leading tribes and armies. Forward Boudica!