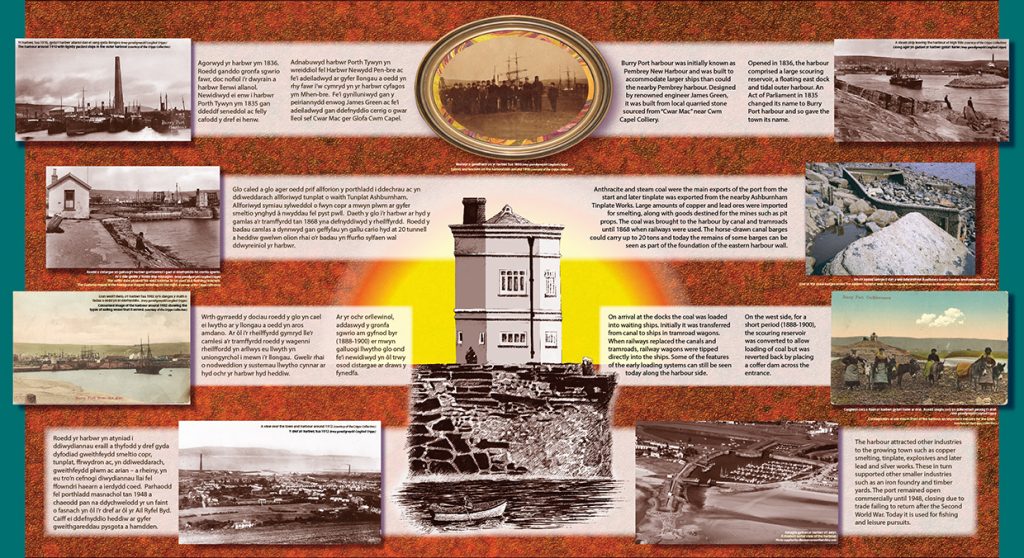 The Burry Port Harbour Interpretation board, positioned at location 6 on the trail.

Burry Port harbour was initially known as Pembrey New Harbour and was built to accommodate larger ships than could the nearby Pembrey harbour. Designed by renowned engineer James Green, it was built from local quarried stone sourced from “Cwar Mac” near Cwm Capel Colliery.

Opened in 1836, the harbour comprised a large scouring reservoir, a floating east dock and tidal outer harbour. An Act of Parliament in 1835 changed its name to Burry Port harbour and so gave the town its name.

Anthracite and steam coal were the main exports of the port from the start and later tinplate was exported from the nearby Ashburnham Tinplate Works. Large amounts of copper and lead ores were imported for smelting, along with goods destined for the mines such as pit props. The coal was brought to the harbour by canal and tramroads until 1868 when railways were used. The horse-drawn canal barges could carry up to 20 tons and today the remains of some barges can be seen as part of the foundation of the eastern harbour wall.

On arrival at the docks the coal was loaded into waiting ships. Initially it was transferred from canal to ships in tramroad wagons. When railways replaced the canals and tramroads, railway wagons were tipped directly into the ships. Some of the features of the early loading systems can still be seen today along the harbour side.

On the west side, for a short period (1888-1900), the scouring reservoir was converted to allow loading of coal but was reverted back by placing a coffer dam across the entrance.

The harbour attracted other industries to the growing town such as copper smelting, tinplate, explosives and later lead and silver works. These in turn supported other smaller industries such as an iron foundry and timber yards. The port remained open commercially until 1948, closing due to trade failing to return after the Second World War. Today it is used for fishing and leisure pursuits.