The Railways and Canals Board 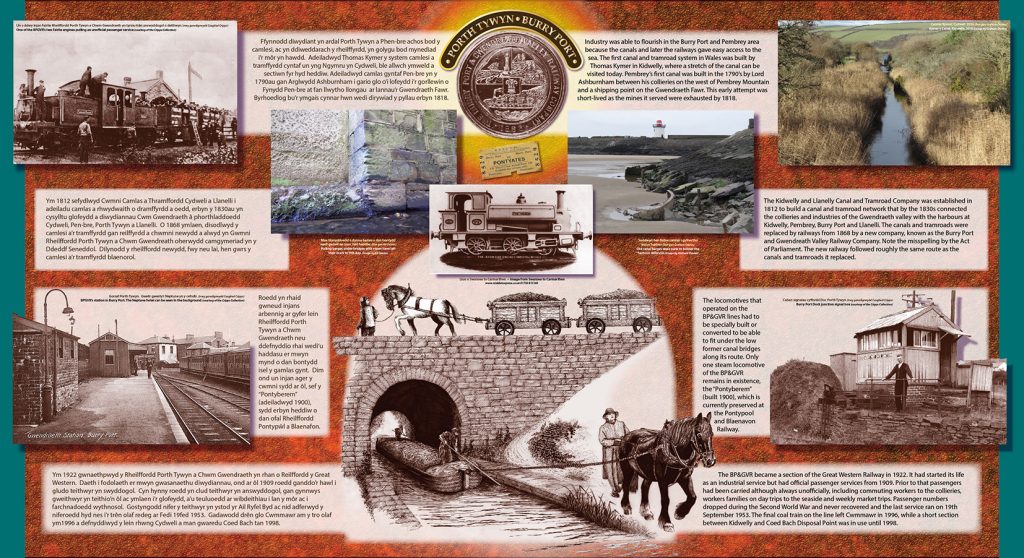 The Trains and Canals positioned at location 2 on the trail.

Industry was able to flourish in the Burry Port and Pembrey area because the canals and later the railways gave easy access to the sea. Pembrey’s first canal was built in the 1790’s by Lord Ashburnham between his collieries on the west of Pembrey Mountain and a shipping point on the Gwendraeth Fawr. This early attempt was short-lived as the mines it served were exhausted by 1818.

The Kidwelly and Llanelly Canal and Tramroad Company was established in 1812 to build a canal and tramroad network that by the 1830s connected the collieries and industries of the Gwendraeth valley with the harbours at Kidwelly, Pembrey, Burry Port and Llanelli.. The canals and tramroads were replaced by railways from 1868 by a new company, known as the Burry Port and Gwendreath Valley Railway Company. Note the misspelling by the Act of Parliament. The new railway followed roughly the same route as the canals and tramroads it replaced.

The BP&GVR became a section of the Great Western Railway in 1922. It had started its life as an industrial service but had official passenger services from 1909. Prior to that passengers had been carried although always unofficially, including commuting workers to the collieries, workers families on day trips to the seaside and weekly market trips. Passenger numbers dropped during the Second World War and never recovered and the last service ran on 19th September 1953. The final coal train on the line left Cwmmawr in 1996, while a short section between Kidwelly and Coed Bach Disposal Point was in use until 1998.

The locomotives that operated on the BP&GVR lines had to be specially built or converted to be able to fit under the low former canal bridges along its route. Only one steam locomotive of the BP&GVR remains in existence, the “Pontyberem” (built 1900), which is currently preserved at the Pontypool and Blaenavon Railway.