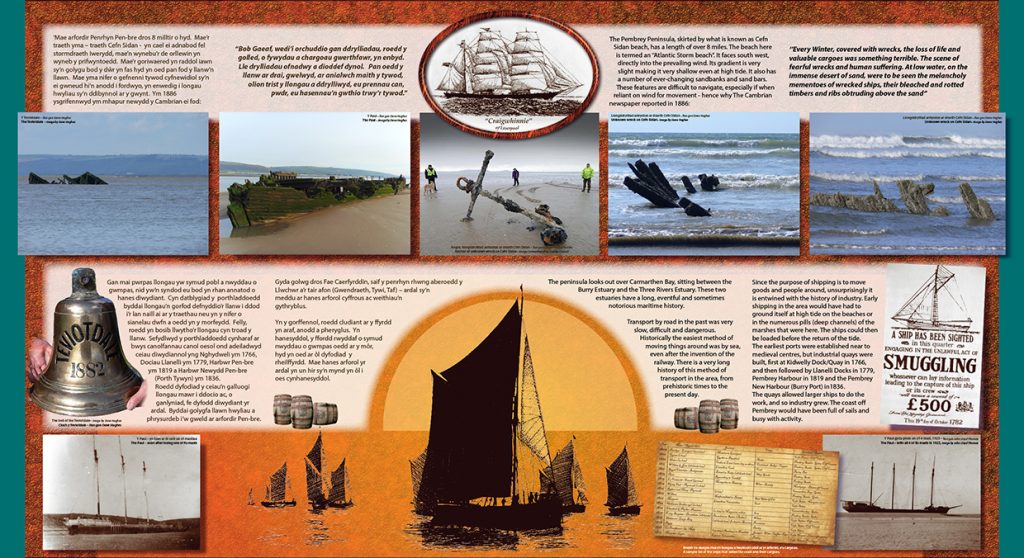 The Cefn Sidan Sands Interpretation board, positioned at location 9 on the trail.

The Pembrey Peninsula, skirted by what is known as Cefn Sidan beach, has a length of over 8 miles. The beach here is termed an ‘’Atlantic Storm beach’’. It faces south west, directly into the prevailing wind. Its gradient is very slight making it very shallow even at high tide. It also has a number of ever-changing sandbanks and sand bars. These features are difficult to navigate, especially if when reliant on wind for movement – hence why The Cambrian newspaper reported in 1886:

‘’Every Winter, covered with wrecks, the loss of life and valuable cargoes was something terrible. The scene of fearful wrecks and human suffering. At low water, on the immense desert of sand, were to be seen the melancholy mementoes of wrecked ships, their bleached and rotted timbers and ribs obtruding above the sand’’

The peninsula looks out over Carmarthen Bay, sitting between the Burry Estuary and the Three Rivers Estuary. These two estuaries have a long, eventful and sometimes notorious maritime history.

Transport by road in the past was very slow, difficult and dangerous. Historically the easiest method of moving things around was by sea, even after the invention of the railway. There is a very long history of this method of transport in the area, from prehistoric times to the present day.

Since the purpose of shipping is to move goods and people around, unsurprisingly it is entwined with the history of industry. Early shipping in the area would have had to ground itself at high tide on the beaches or in the numerous pills (deep channels) of the marshes that were here. The ships could then be loaded before the return of the tide. The earliest ports were established near to medieval centres, but industrial quays were built, first at Kidwelly Dock/Quay in 1766, and then followed by Llanelli Docks in 1779, Pembrey Harbour in 1819 and the Pembrey New Harbour (Burry Port) in 1836.

The quays allowed larger ships to do the work, and so industry grew. The coast off Pembrey would have been full of sails and busy with activity.