Stunning view of the old Pembrey Harbour from the Burry Port Harbour light.

The area is situated on a coastal stretch of the South Wales Coalfield which has been exploited for hundreds of years. Prior to and during the early industrial revolution shipments of coal were made in small quantities by sailing craft using the tidal estuary creeks and pills that feed into the Burry inlet, from Llangennech and Loughor in the east, through to Bynea, Llanelli, Pwll, Pembrey and Kidwelly in the west. Note that Burry Port did not exist until the harbour was built and the marsh and dune area it occupies was primarily known as Tywyn Bach prior to the 1830s.

As time went by coal extraction improved as production increased forcing mine owners and sea captains to look for a better means to load their cargoes. Temporary loading stages on the edges of creeks and pills would be replaced by harbours, quays and docks, allowing larger ships to load more coal and goods.

Kidwelly had been a medieval centre for trade on the coast and unsurprisingly it was here that emerged the first attempt. In 1766 Thomas Kymer was granted permission by an Act of Parliament to build a short canal and tramroad network to link his mine at Pwll y Llygod to a purpose built dock at the mouth of the Gwendraeth Fach river, to the west of Kidwelly. It continued in use as a canal until the canal routes were overtaken by railways but the quay itself became quieter as time progressed as it proved to be prone to silting and so unable to serve the larger vessels of subsequent years.

Meanwhile in Pembrey industry was driven apace by individual industrialists who arranged leases of land to extract coal which they then carted to the waiting vessels on the beaches or in the pills. Most notable of those industrialists was George Bowser who came to the area from Middlesex at some point prior to 1806, and tried his hands at a variety of industrial ventures. He leased land from the Ashburnham estate to the west of Pembrey Mountain on the edge of what is known as Pinged Marshes near Bryndias, also known locally as the Frwd. The coal from these mines could have used the canal constructed by the Ashburnham estate from 1797 which led to the Gwendraeth Fawr or have been carted to the nearby pills.

Having invested in one mine close to the end of its life, Bowser sought out others and took out further land leases from Lord Cawdor’s estate in the north east of Pembrey Mountain in the area known as Cwm Capel. These new mines needed a better transport method to ensure better profits so Bowser worked with other local entrepreneurs to fund the construction of a purpose built shipping place at a location that suited them all. Advice was sought from expert mariner of the time Captain John Wedge, who suggested a position near to the outflow of Nant Derwydd where there existed off shore a mooring point called Carreg Edwig, to the south west of Pembrey.

Bowser had already established a working shipping point here when in 1816 work began on turning it into a harbour. Water was diverted from Nant Dyfatty and Derwydd to help scour out a suitable spot in the dunes. An early partner in his schemes was Thomas Gaunt of London who had been Bowser’s solicitor, but had moved to the area and taken on his own industrial ventures. When Bowser found himself facing financial difficulties due to the harbour venture, he withdrew causing much friction between him and the other partners, but most significantly Gaunt.

When the harbour was opened in 1819 it comprised a flushing reservoir and an outer harbour with loading stages to accommodate sailing vessels. In 1824 the Pembrey Coal & Iron Company opened the Pembrey Canal to link the harbour with the Kidwelly and Llanelly Canal and Tramroad Company’s (KLLCT) network. This allowed them to barge in the iron ore and coal they needed from the Gwendraeth valley as well as providing a potential route for other coal traffic to use the harbour. Pembrey canal terminated at a basin near to the harbour called “Glo-Caled”, currently a cottage situated on the golf links, and thence carted to the quay on a tramroad. Gaunt had a mine immediately to the north of the harbour which he called Ivy Pit (later known as Stanley’s Pit) that was connected to the harbour by a tramroad running on a large embankment that is still visible today as it cuts across the golf links.

Bowser had intended to use an extension of the tramroad that served Gwscwm to transport coal from his workings in Cwm Capel to the harbour, but from 1821 his disputes with Gaunt led to him being barred from using the route and having to seek other opportunities to export his coal.

The harbour thrived over a period of time but was beset by continuous silting problems. A major factor was that the harbour was just too small to cope with the demands that the Gwendraeth Valley traffic as judged by the KLLCT engineers and so they felt a bigger harbour was needed. That story can be read about in the Burry Port Harbour page.

The harbour continued in use, exporting coal from the mines that were linked to it directly, although Pembrey Canal fell into disuse soon after the opening of the new harbour so the number of mines was small indeed. In the 1880s the harbour saw a brief resurgence when it was dredged and cleared to serve the explosives factory that was located in the dunes to the west at Cefn Sidan but that venture ended a few years after 1900 (see Explosives page for more details). After that it was used by small vessels only until it became too silted up even for them to use it regularly, leaving it as a silted refuge for wading birds and shoreline plants.

When George Bowser first arrived in 1806, Burry Port didn’t exist. Bowser was described as a ‘merchant of East Cheap, London’. In 1793 he became a Freeman of the City of London and a member of a couple of City Guilds, which were essentially social clubs for wealthy gentlemen.
The Industrial Revolution was then in full swing and vast fortunes were being made. Englishmen were optimistically investing a lot of money, sometimes in risky projects. Several Londoners joined the ‘black gold-rush’ in the South Wales Coalfield. In the early 1800’s George decided to get in on the act by forming a partnership with some Swansea copper smelters. Later he worked with Alexander Raby, the iron master of Llanelli. 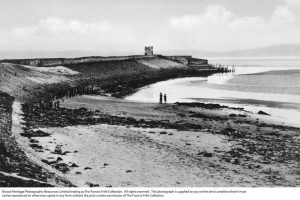 In 1806 George Bowser and his family moved from Middlesex to Kidwelly. He started coal mining in Bryndias, Pinged, and built a house nearby. In January 1807 he acquired Cwm Capel, and four other small mines nearby. Bowser invested heavily in their development and he also built Kenros House. However, the only available shipping place, Barnaby Pill, was woefully inadequate. In July 1809, Bowser laid out plans for a tram road and canal to a new shipping point at Carreg Edwig, near the site of the Old Harbour. This was a difficult and expensive undertaking and it also proved inadequate.

In 1815, Bowser turned for help to his solicitor, Thomas Gaunt who proposed a partnership with Bowser, himself and two others to build a harbour, canal and tramways. This was desperately needed since shipping from Kidwelly had almost ceased because of silting. However, Bowser became alarmed at the escalating costs of Pembrey Harbour, and in March 1818 he left the project. This proved acrimonious and Gaunt prevented Bowser using the harbour.

A canal brought coal from the Gwendraeth Valley to what is now the Links. A tramway was laid from Stanley’s Pit and the New Pit along the embankment and another from Gwscwm Colliery. Pembrey Harbour opened on May 1st 1824 and was successful for a time. However it soon became apparent it couldn’t handle the amount of coal produced in the area and it also suffered from silting. In 1824 Bowser proposed a new, larger harbour in Tywyn Bach. However, when the New Pembrey Harbour Company was formed in 1825, Bowser was excluded. The way he left the Pembrey Harbour project and his lack of finances went against him. In 1829 Gaunt’s enterprises folded due to mismanagement and he absconded to America leaving Bowser holding many of his debts. Gaunt’s assets went into receivership. However, Bowser could now use Pembrey Harbour to ship coal.

In 1831 a tram road from Cwm Capel was laid to transport stone for the new harbour. This also provided Bowser with an outlet for his coal. However, soon after the harbour opened in 1832 some walls collapsed and it was closed to shipping. The harbour finally opened on 31st January 1836. To avoid confusion with the Old Harbour, its name was changed to Burry Port Harbour. George Bowser’s vision had become a reality, however, he never lived to see it. He died on 25th March 1835, but his sons, Samuel and George jnr. continued shipping coal from Cwm Capel down the tramway to the new harbour. In 1841, the East Dock was opened which greatly enhanced capacity for shipping. The plentiful supply of coal and good harbour facilities attracted further industrial expansion – the copper works in 1849, silver works in 1853, lead works in 1865 and tinplate works in 1890. When the new harbour opened, workers flooded in with their families and Burry Port was born.