The interpretation board created to capture the story of Pembrey Harbour 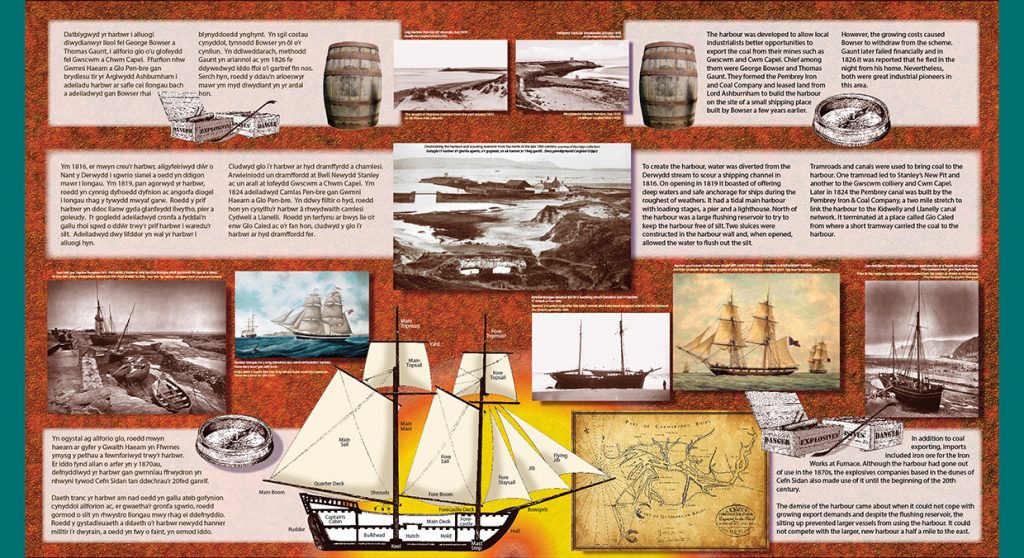 The Pembrey Harbour Interpretation board, positioned at location 7 on the trail.

The harbour was developed to allow local industrialists better opportunities to export the coal from their mines such as Gwscwm and Cwm Capel. Chief among them were George Bowser and Thomas Gaunt. They formed the Pembrey Iron and Coal Company and leased land from Lord Ashburnham to build the harbour on the site of a small shipping place built by Bowser a few years earlier. However, the growing costs caused Bowser to withdraw from the scheme. Gaunt later failed financially and in 1826 it was reported that he fled in the night from his home. Nevertheless, both were great industrial pioneers in this area.

To create the harbour, water was diverted from the Derwydd stream to scour a shipping channel in 1816. On opening in 1819 it boasted of offering deep waters and safe anchorage for ships during the roughest of weathers. It had a tidal main harbour with loading stages, a pier and a lighthouse. North of the harbour was a large flushing reservoir to try to keep the harbour free of silt. Two sluices were constructed in the harbour wall and, when opened, allowed the water to flush out the silt.

Tramroads and canals were used to bring coal to the harbour. One tramroad led to Stanley’s New Pit and another to the Gwscwm colliery and Cwm Capel. Later in 1824 the Pembrey canal was built by the Pembrey Iron & Coal Company, a two mile stretch to link the harbour to the Kidwelly and Llanelly canal network. It terminated at a place called Glo Caled from where a short tramway carried the coal to the harbour.

In addition to coal exporting, imports included iron ore for the Iron Works at Furnace. Although the harbour had gone out of use in the 1870’s, the explosives companies based in the dunes of Cefn Sidan also made use of it until the beginning of the 20th century.

The demise of the harbour came about when it could not cope with growing export demands and despite the flushing reservoir, the silting up prevented larger vessels from using the harbour. It could not compete with the larger, new harbour a half a mile to the east.