The interpretation board created to capture the story of the Tramway 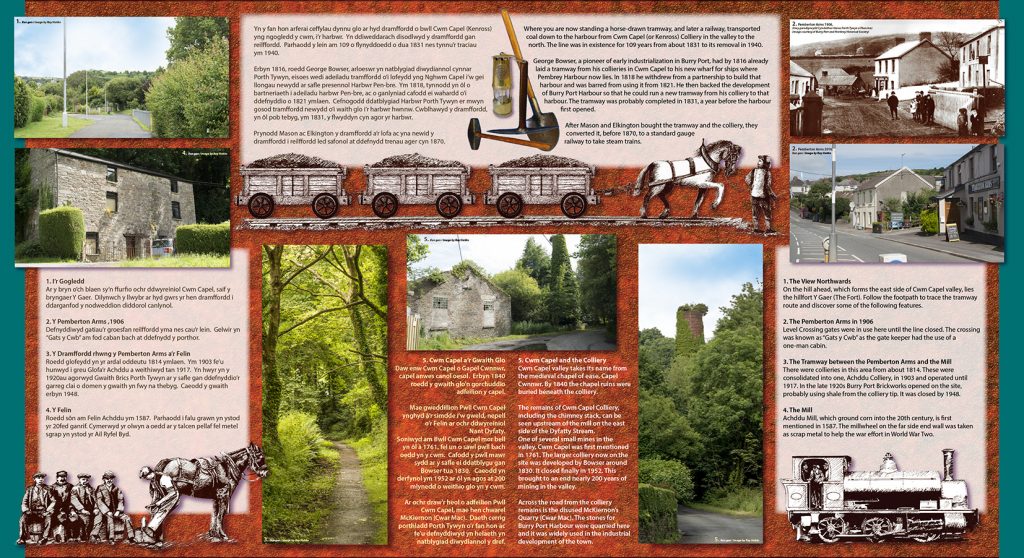 The Tramway Interpretation board, positioned at location 1 on the trail.

Where you are now standing a horse-drawn tramway, and later a railway, transported coal down to the harbour from Cwm Capel (or Kenross) Colliery in the valley to the north. The line was in existence for 109 years from about 1831 to its removal in 1940.

George Bowser, a pioneer of early industrialization in Burry Port, had by 1816 already laid a tramway from his collieries in Cwm Capel to his new wharf for ships where Pembrey Harbour now lies. In 1818 he withdrew from a partnership to build that harbour and was barred from using it from 1821. He then backed the development of Burry Port Harbour so that he could run a new tramway from his colliery to that harbour. The tramway was probably completed in 1831, a year before the harbour first opened.

After Mason and Elkington bought the tramway and the colliery, they converted it, before 1870, to a standard gauge railway to take steam trains.

On the hill ahead, which forms the east side of Cwm Capel valley, lies the hillfort Y Gaer (The Fort). Follow the footpath to trace the tramway route and discover some of the following features.

Level Crossing gates were in use here until the line closed. The crossing was known as “Gats y Cwb” as the gate keeper had the use of a one-man cabin.

The Tramway between the Pemberton Arms and the Mill

There were collieries in this area from about 1814. These were consolidated into one, Achddu Colliery, in 1903 and operated until 1917. In the late 1920s Burry Port Brickworks opened on the site, probably using shale from the colliery tip. It was closed by 1948.

Achddu Mill, which ground corn into the 20th century, is first mentioned in 1587. The millwheel on the far side end wall was taken as scrap metal to help the war effort in World War Two.

Cwm Capel and the Colliery

Cwm Capel valley takes its name from the medieval chapel of ease, Capel Cwnnwr. By 1840 the chapel ruins were buried beneath the colliery.

The remains of Cwm Capel Colliery, including the chimney stack, can be seen upstream of the mill on the east side of the Dyfatty Stream.

One of several small mines in the valley, Cwm Capel was first mentioned in 1761. The larger colliery now on the site was developed by Bowser around 1830. It closed finally in 1952. This brought to an end nearly 200 years of mining in the valley.

Across the road from the colliery remains is the disused McKiernon’s Quarry (Cwar Mac). The stones for Burry Port Harbour were quarried here and it was widely used in the industrial development of the town.