The Copper Works Board

The interpretation created to capture the story of the Copper Works. 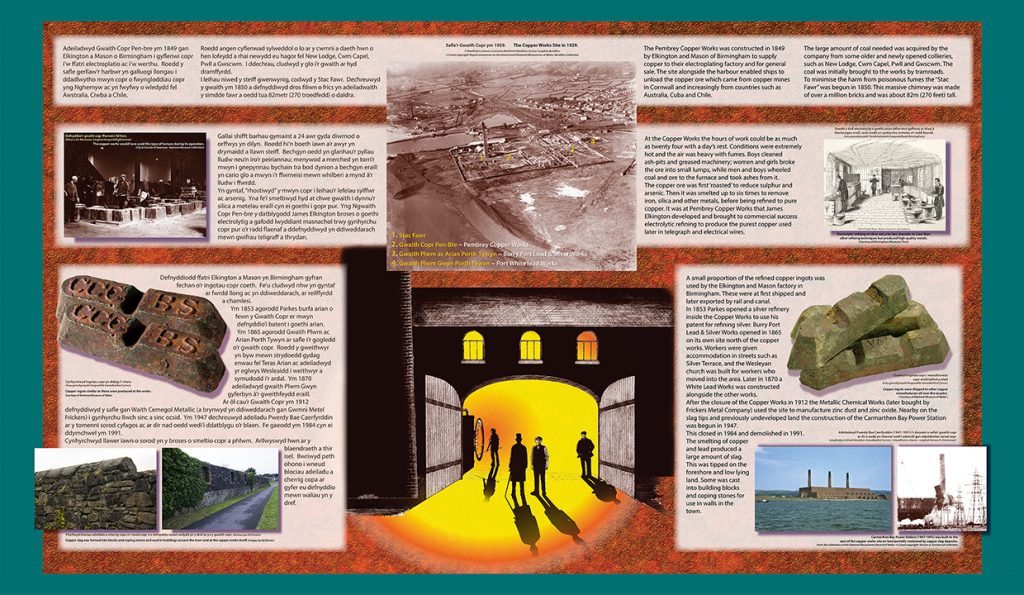 The Pembrey Copper Works positioned at location 3 on the trail.

The Pembrey Copper Works was constructed in 1849 by Elkington and Mason of Birmingham to supply copper to their electroplating factory and for general sale. The site alongside the harbour enabled ships to unload the copper ore which came from copper mines in Cornwall and increasingly from countries such as Australia, Cuba and Chile.

The large amount of coal needed was acquired by the company from some older and newly opened collieries, such as New Lodge, Cwm Capel, Pwll and Gwscwm. The coal was initially brought to the works by tramroads.

To minimise the harm from poisonous fumes the “Stac Fawr” was begun in 1850. This massive chimney was made of over a million bricks and was about 82m (270 feet) tall.

At the Copper Works the hours of work could be as much as twenty four with a day’s rest. Conditions were extremely hot and the air was heavy with fumes. Boys cleaned ash-pits and greased machinery; women and girls broke the ore into small lumps, while men and boys wheeled coal and ore to the furnace and took ashes from it.

The copper ore was first ‘roasted’ to reduce sulphur and arsenic. Then it was smelted up to six times to remove iron, silica and other metals, before being refined to pure copper. It was at Pembrey Copper Works that James Elkington developed and brought to commercial success electrolytic refining to produce the purest copper used later in telegraph and electrical wires.

A small proportion of the refined copper ingots was used by the Elkington and Mason factory in Birmingham. These were at first shipped and later exported by rail and canal.

In 1853 Parkes opened a silver refinery inside the Copper Works to use his patent for refining silver. Burry Port Lead & Silver Works opened in 1865 on its own site north of the copper works. Workers were given accommodation in streets such as Silver Terrace, and the Wesleyan church was built for workers who moved into the area. Later in 1870 a White Lead Works was constructed alongside the other works.

After the closure of the Copper Works in 1912 the Metallic Chemical Works (later bought by Frickers Metal Company) used the site to manufacture zinc dust and zinc oxide. Nearby on the slag tips and previously undeveloped land the construction of the Carmarthen Bay Power Station was begun in 1947. This closed in 1984 and demolished in 1991.

The smelting of copper and lead produced a large amount of slag. This was tipped on the foreshore and low lying land. Some was cast into building blocks and coping stones for use in walls in the town.