The interpretation board created to capture the story of the Munitions 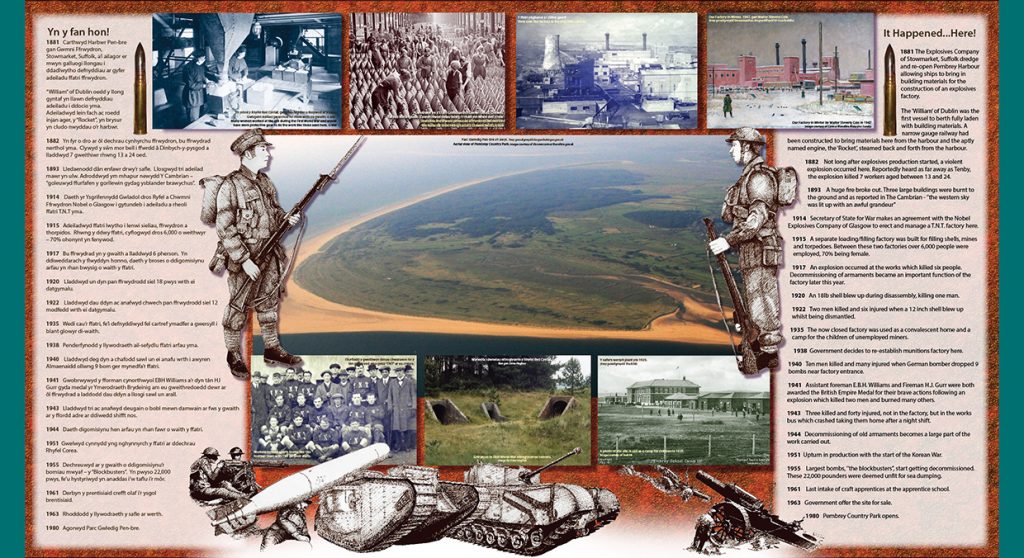 The Munitions Interpretation board, positioned at location 8 on the trail.

1881 The Explosives Company of Stowmarket, Suffolk dredge and re-open Pembrey Harbour allowing ships to bring in building materials for the construction of an explosives factory.

The ‘William’ of Dublin was the first vessel to berth fully laden with building materials. A narrow gauge railway had been constructed to bring materials here from the harbour and the aptly named engine, the ‘Rocket’, steamed back and forth from the harbour.

1882 Not long after explosives production started, a violent explosion occurred here. Reportedly heard as far away as Tenby, the explosion killed 7 workers aged between 13 and 24.

1893   A huge fire broke out. Three large buildings were burnt to the ground and as reported in The Cambrian – ‘’the western sky was lit up with an awful grandeur’’.

1914 Secretary of State for War makes an agreement with the Nobel Explosives Company of Glasgow to erect and manage a T.N.T. factory here.

1915 A separate loading/filling factory was built for filling shells, mines and torpedoes. Between these two factories over 6,000 people were employed, 70% being female.

1917 An explosion occurred at the works which killed six people. Decommissioning of armaments became an important function of the factory later this year.

1920 An 18lb shell blew up during disassembly, killing one man.

1922 Two men killed and six injured when a 12 inch shell blew up whilst being dismantled.

1935 The now closed factory was used as a convalescent home and a camp for the children of unemployed miners.

1941 Assistant foreman E.B.H. Williams and Fireman H.J. Gurr were both awarded the British Empire Medal for their brave actions following an explosion which killed two men and burned many others.

1943 Three killed and forty injured, not in the factory, but in the works bus which crashed taking them home after a night shift.

1944   Decommissioning of old armaments becomes a large part of the work carried out.

1951  Upturn in production with the start of the Korean War.

1955   Largest bombs, ‘’the blockbusters’’, start getting decommissioned. These 22,000 pounders were deemed unfit for sea dumping.

1961   Last intake of craft apprentices at the apprentice school.

1963 Government offer the site for sale.