The interpretation board created on Copperworks school 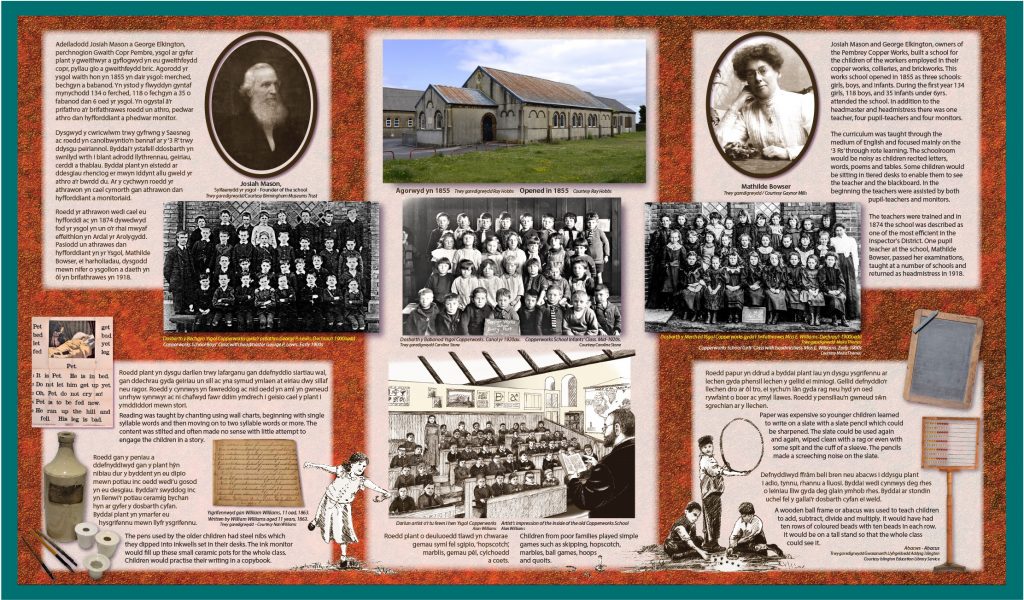 The School   – Text of the Board

Josiah Mason and George Elkington, owners of the Pembrey Copper Works, built a school for the children of the workers employed in their copper works, collieries, and brickworks. This works school opened in 1855 as three schools: girls, infants, and boys. During the first year 134 girls, 118 boys, and 35 infants under 6yrs. attended the school. In addition to the headmaster and headmistress there was one teacher, four pupil teachers and four monitors.

The curriculum was taught through the medium of English and focused mainly on the ‘3 Rs’ with rote learning. The schoolroom would be noisy as children recited letters, words, poems and tables. Some children would be sitting in tiered desks to enable them to see the teacher and the blackboard. The pupil teachers and monitors would move around to help the younger children.

The teachers were trained and in 1874 the school was described as ‘one of the most efficient in the Inspector’s District. One pupil teacher at the School, Mathilde Bowser, passed her examinations, taught at a number of schools and returned as headmistress in 1918.

The pens used by the older children had steel nibs which they dipped into inkwells set in their desks. The ink monitor would fill up these small ceramic pots for the whole class. Children would practise their writing in a copybook.

Paper was expensive so young children learned to write on a slate with a slate pencil which could be sharpened. The slate could be used again and again, wiped clean with a sponge or even with some spit and the cuff of a sleeve. The pencils made a screeching noise on the slate.

A wooden ball frame or abacus was used to teach children to add, subtract, divide and multiply. It would have had ten rows of coloured beads with ten beads in each row. It would be on a tall stand  so that the whole class could see it.

Reading was taught by chanting using wall charts, beginning with single syllable words and then moving on to two syllable words or more. The content was stilted and often made no sense with little attempt to engage the children in a story.