The Men Who Made Burry Port Board 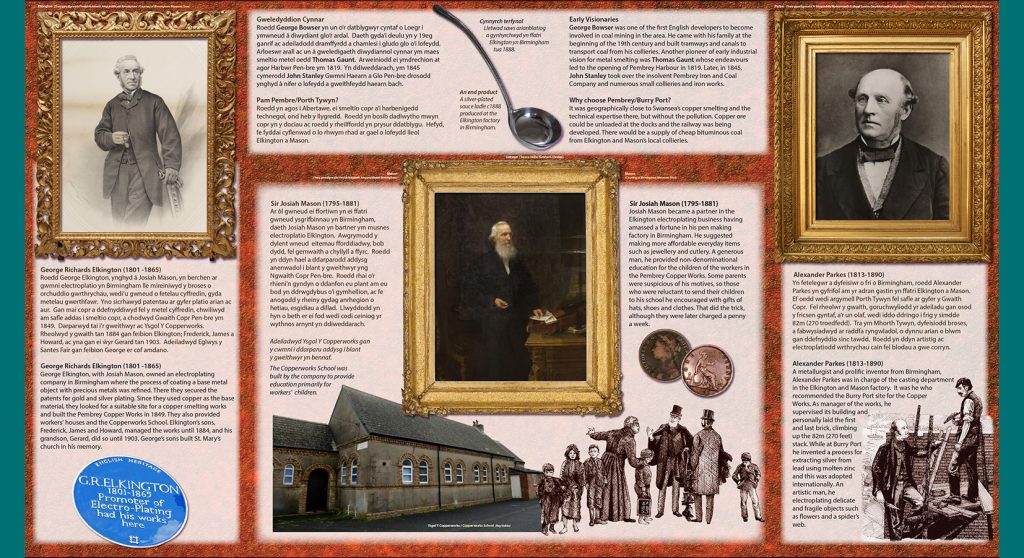 TheMen Who Made Burry Port Interpretation board, positioned at location 4 on the trail.

The Men Who Made Burry Port

George Elkington, with Josiah Mason, owned an electroplating company in Birmingham where the process of coating a base metal object with precious metals was refined. There they secured the patents for gold and silver plating. Since they used copper as the base material, they looked for a suitable site for a copper smelting works and built the Pembrey Copper Works in 1849. They also provided workers’ houses and the Copperworks School. Elkington’s sons, Frederick, James and Howard, managed the works until 1884, and his grandson, Gerard, did so until 1903. George’s sons built St. Mary’s church in his memory.

Josiah Mason became a partner in the Elkington electroplating business having amassed a fortune in his pen making factory in Birmingham. He suggested making more affordable everyday items such as jewellery and cutlery. A generous man, he provided non-denominational education for the children of the workers in the Pembrey Copper Works. Some parents were suspicious of his motives, so those who were reluctant to send their children to his school he encouraged with gifts of hats, shoes and clothes. That did the trick, although they were later charged a penny a week.

A metallurgist and prolific inventor from Birmingham, Alexander Parkes was in charge of the casting department in the Elkington and Mason factory. It was he who recommended the Burry Port site for the Copper Works. As manager of the works, he supervised its building and personally laid the first and last brick, climbing up the 82m (270 feet) stack. While at Burry Port he invented a process for extracting silver from lead using molten zinc and this was adopted internationally. An artistic man, he electroplating delicate and fragile objects such as flowers and a spider’s web.

It was geographically close to Swansea’s copper smelting and the technical expertise there, but without the pollution. Copper ore could be unloaded at the docks and the railway was being developed. There would be a supply of cheap bituminous coal from Elkington and Mason’s local collieries.

A silver-plated sauce ladle c1888 produced at the Elkington factory in Birmingham.

George Bowser was one of the first English developers to become involved in coal mining in the area. He came with his family at the beginning of the 19th century and built tramways and canals to transport coal from his collieries. Another pioneer of early industrial vision for metal smelting was Thomas Gaunt whose endeavours led to the opening of Pembrey Harbour in 1818. Later, in 1845, John Stanley took over the insolvent Pembrey Iron and Coal Company and numerous small collieries and iron works.