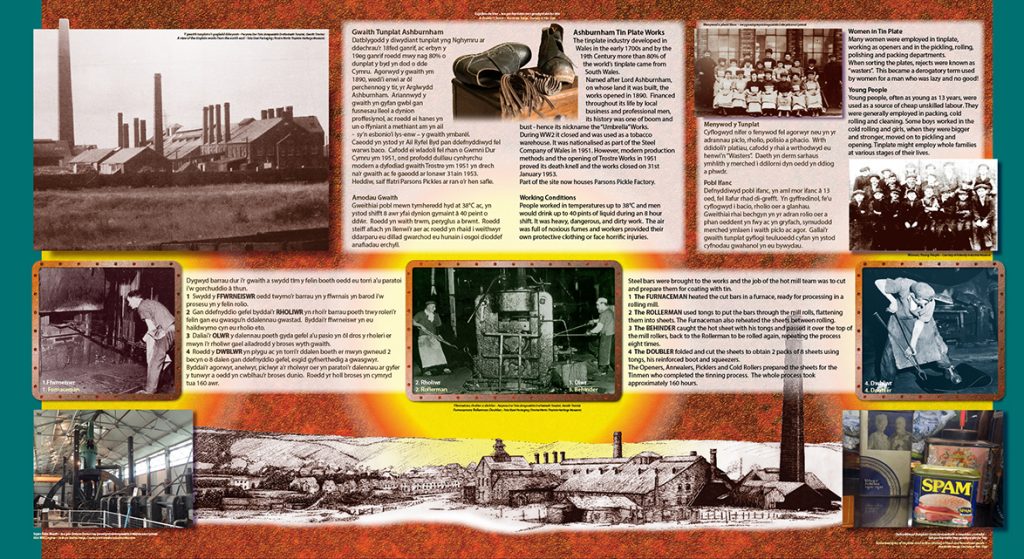 The tinplate industry developed in Wales in the early 1700s and by the 19th Century more than 80% of the world’s tinplate came from South Wales.

Named after Lord Ashburnham, on whose land it was built, the works opened in 1890. Financed throughout its life by local business and professional men, its history was one of boom and bust – hence its nickname the “Umbrella” Works.

During WW2 it closed and was used as a tobacco warehouse. It was nationalised as part of the Steel Company of Wales in 1951. However, modern production methods and the opening of Trostre Works in 1951 proved its death knell and the works closed on 31st January 1953.

Steel bars were brought to the works and the job of the hot mill team was to cut and prepare them for coating with tin.

1 The FURNACEMAN heated the cut bars in a furnace, ready for processing in a rolling mill.

2 The ROLLERMAN used tongs to put the bars through the mill rolls, flattening them into sheets. The Furnaceman also reheated the sheets between rolling.

3 The BEHINDER caught the hot sheet with his tongs and passed it over the top of the mill rollers, back to the Rollerman to be rolled again, repeating the process eight times.

4 The DOUBLER folded and cut the hot sheet to obtain 2 packs of 8 sheets using tongs, his reinforced boot and squeezers connected to the hot mill engine.

The Openers, Annealers, Picklers and Cold Rollers prepared the sheets for the Tinmen who completed the tinning process. The whole process took approximately 160 hours.

People worked in temperatures up to 38°C and men would drink up to 40 pints of liquid during an 8 hour shift. It was heavy, dangerous, and dirty work. The air was full of noxious fumes and workers provided their own protective clothing or face horrific injuries.

Many women were employed in tinplate, working as openers and in the pickling, rolling, polishing and packing departments.

When sorting the plates, rejects were known as “wasters”. This became a derogatory term used by women for a man who was lazy and no good!

Young people, often as young as 13 years, were used as a source of cheap unskilled labour. They were generally employed in packing, cold rolling and cleaning. Some boys worked in the cold rolling and girls, when they were bigger and stronger, moved on to pickling and opening. Tinplate might employ whole families at various stages of their lives.{:}{:cy}WELSH CONTENT to appear here{:}