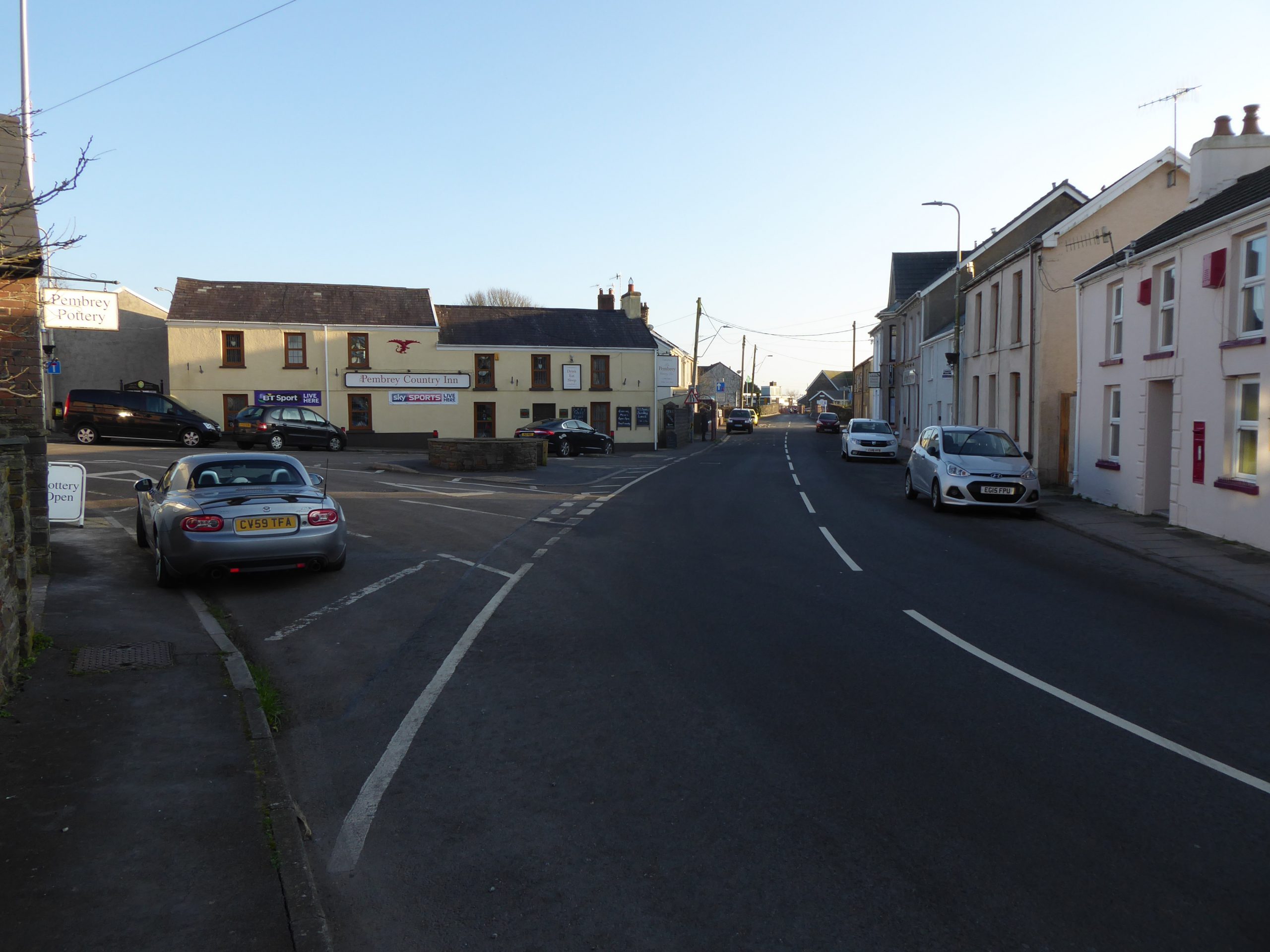 According to Pembrey Parish Registers Randell Square is named after Francis Randell, baptised 28th May 1800 in Kidwelly and died 10th February 1870 in Pembrey parish. He is buried in St Illtyd’s churchyard Pembrey. His father, Captain Francis Randell was born in Clovelly, Devon in 1772.
Coastal shipping was the primary means of conducting trade and the Randells had been trading with Welsh ports for centuries. 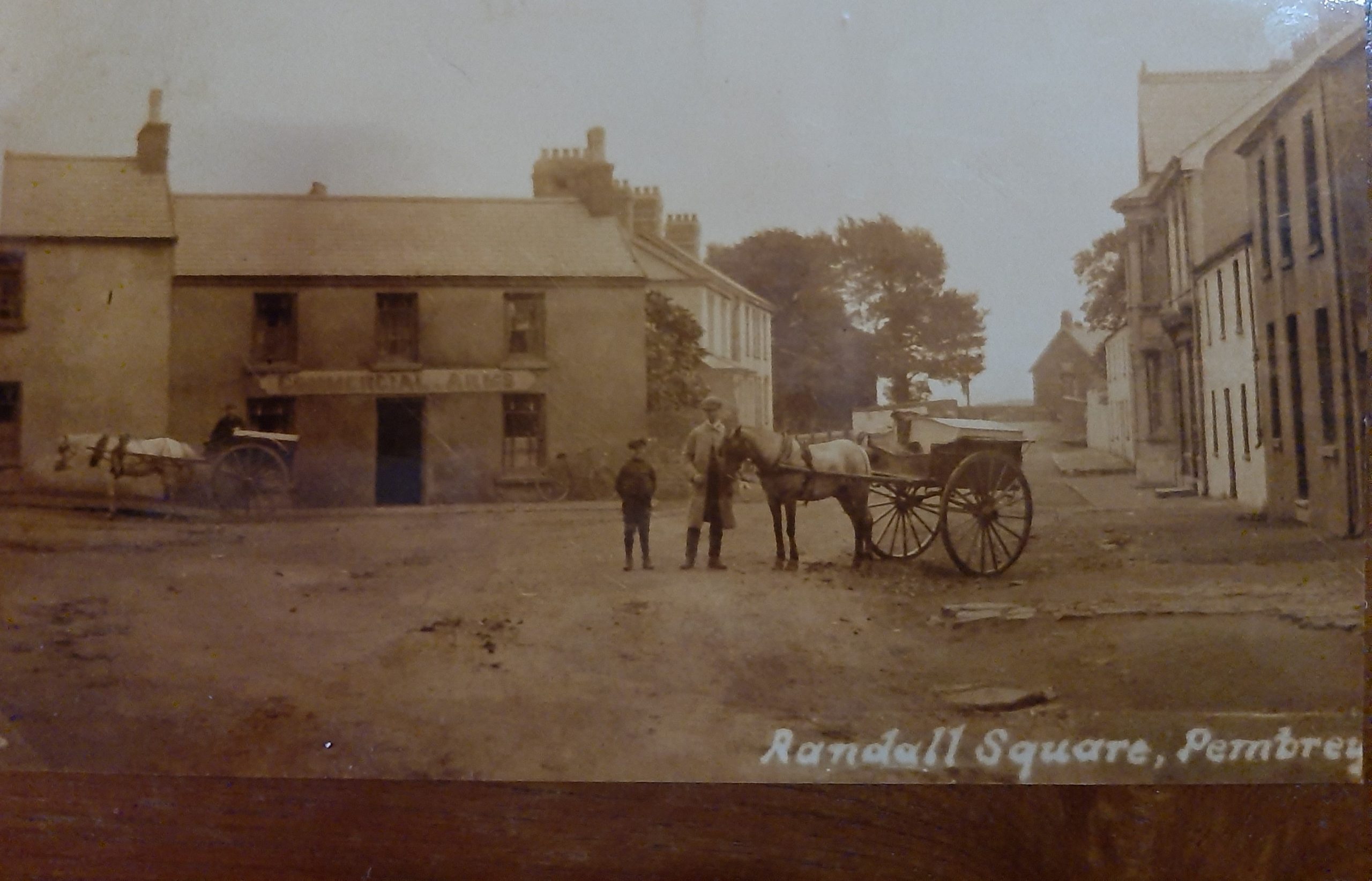 Kidwelly was an important trading town and the Gwendraeth valley was rich in coal – essential for powering the industrial revolution of the eighteenth and nineteenth centuries
Captain Randell moved to Kidwelly, where on the 17th of January 1797 he married local girl Rebecca Thomas. They made their home in Bowers (Water) Street

And so the Randells came to Carmarthenshire.
The most eminent Randell of Victorian times was David Randell (1854-1912) son of John (1827-1887) and grandson of Francis (1800 – 1870). David became a solicitor and Liberal MP (no Labour Party until 1905) for the Gower Division from 1888 (nominated by the tinplate workers) until 1900 when he retired through ill-health. Randell Saunders and Randell solicitors are still in Llanelli – now known as Randell Saunders Phillips and Lloyd.

Over 18 years Francis and Rebecca had 8 children. Six survived to adulthood. 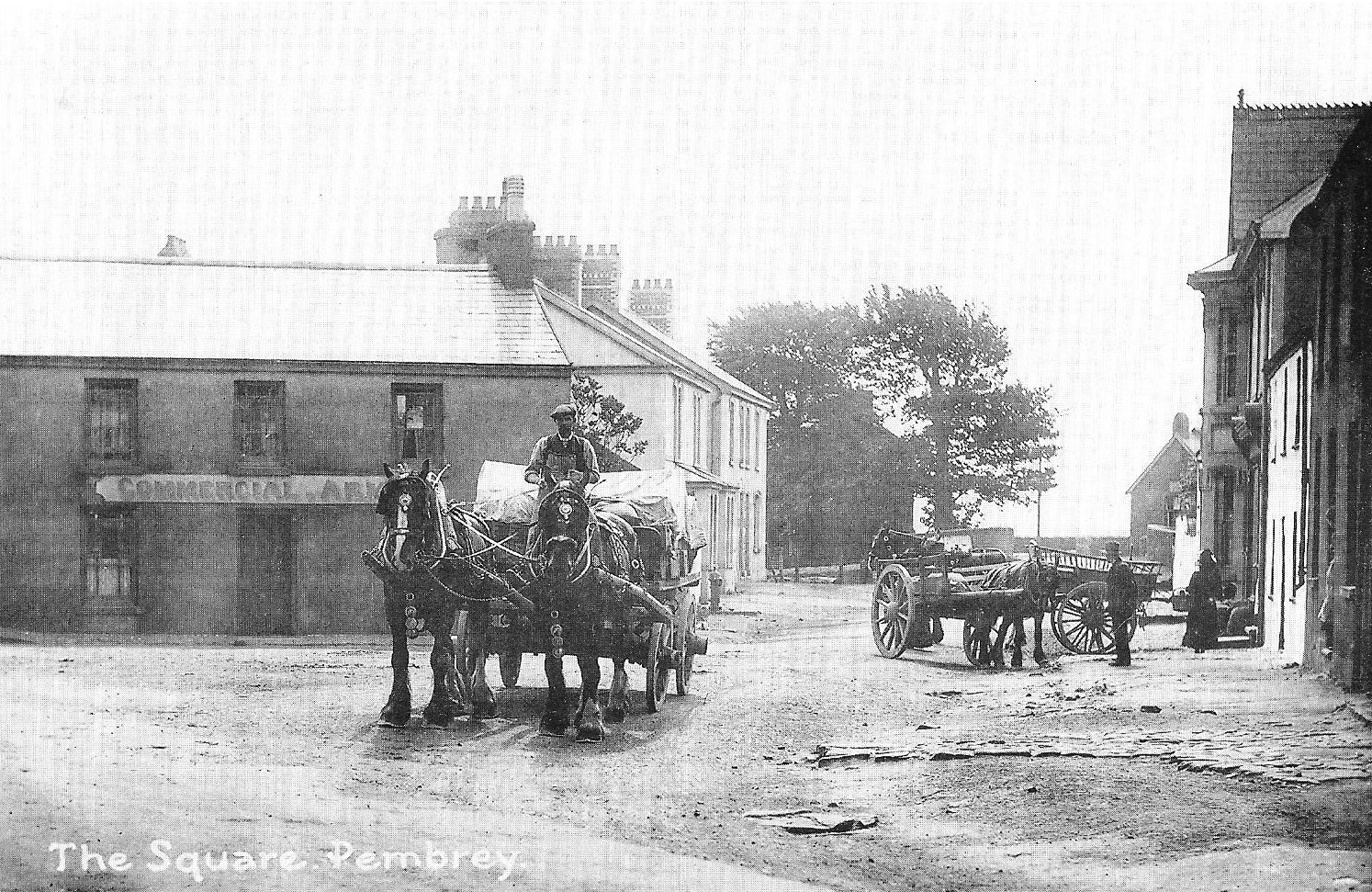 Randell Square is named after the eldest boy, Francis. This is his story.
Francis was born in Bowers St and baptised on 28th May 1800. He spent his boyhood in Kidwelly surrounded by shipping. He became familiar with the life of a publican as his parents moved to Causey (Bridge) Street, Kidwelly where they opened the Hope and Anchor.
On December 4th 1821 Francis paid one guinea to be admitted as a burgess of Kidwelly. He would no longer have to pay port tolls in Britain.

Why had the family moved to Pembrey?  The decline of Kidwelly.
Kidwelly was silting up and the demands of the industrial revolution meant that ships were getting bigger. (In 1852, with little local opposition, the railway bridge built over the Gwendraeth estuary was the final blow for Kidwelly. The bridge was too low for ships of any size to pass under.)

The Rise of Pembrey
Before the harbour was built in 1819 Pembrey was a small village with an agricultural economy. Kidwelly was more prosperous than Pembrey, but all that was about to change.
After 1819 ships were increasingly diverted to Pembrey harbour, which was well served by canals and tramways from the coal mines on Mynydd Pen-bre and in the Gwendraeth valley. Pembrey was an established village. Burry Port was little more than a bleak marsh. (It expanded rapidly after the construction of Burry Port harbour in 1832 and the coming of the railway in 1852 resulting in an exponential rise in industry). 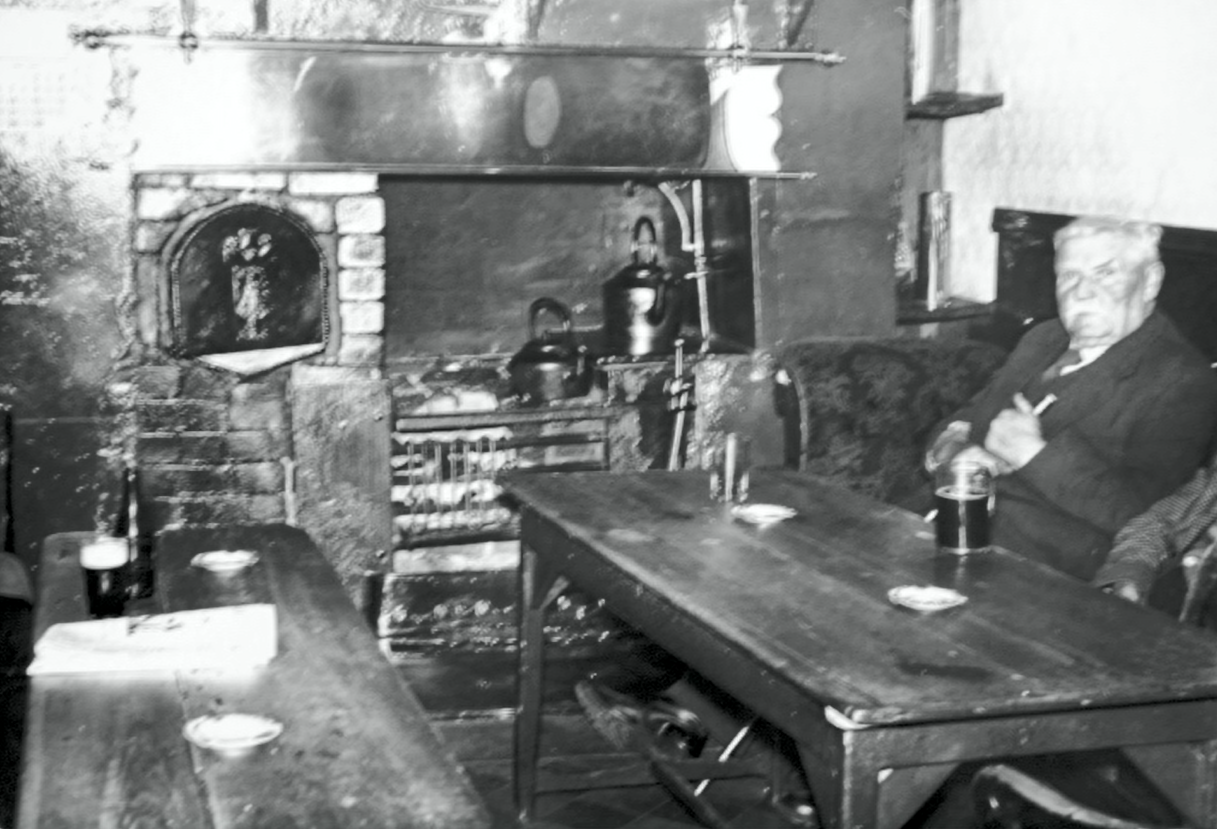 Inside the Commercial Arms in the 1950s
Courtesy CCC       Copyright unknown

Sometime after 1834 the family moved to a house in Pembrey village square which was, or became, the Commercial Arms. In the 1841 census Francis Randell is listed as ‘publican in Pembrey Village’
Francis used the inn as a place of business. Is this how the pub acquired its name?
By the 1861 census Francis Randell was living at 2 Pilot Terrace Pembrey (Burry Port) . It can be concluded that Francis lived in the Commercial Arms for most of the years between 1834 and 1861. He owned the two adjoining cottages, known as numbers 1 and 2 Randell’s Row. It is probable that the square acquired its name in the same way. 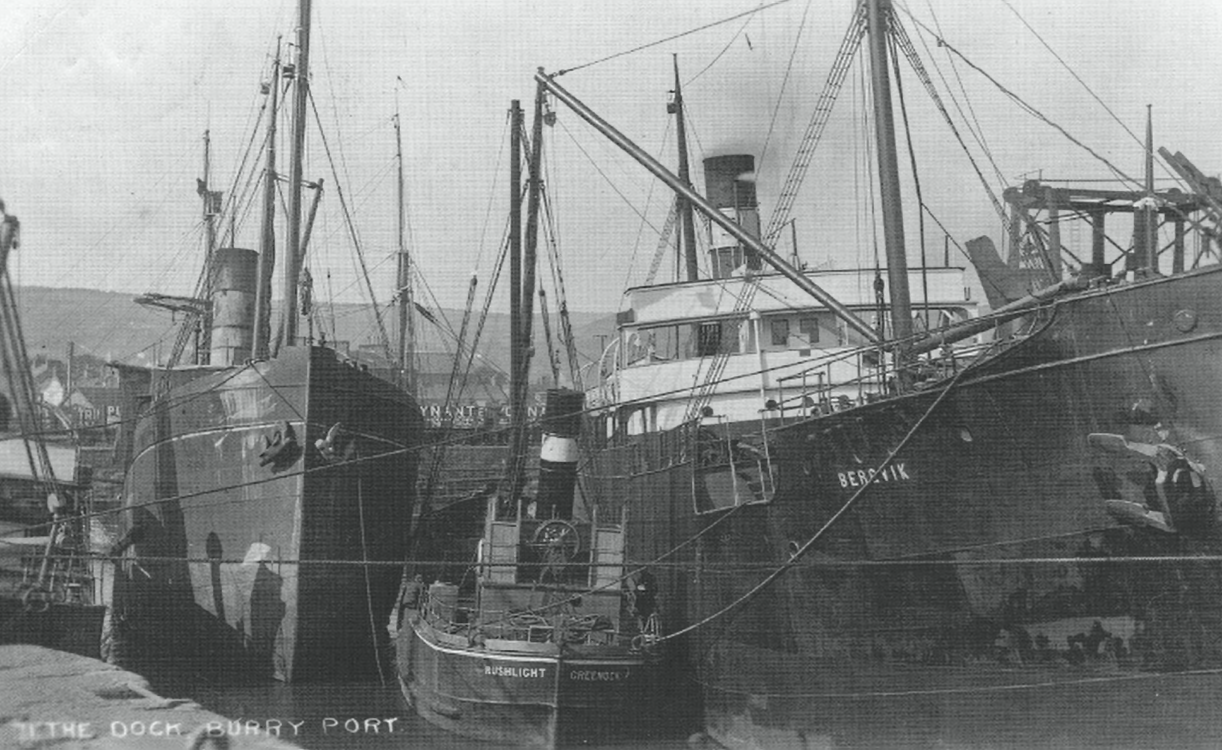 Master Mariner and Shipowner
The 1841 census shows that maritime activity was still concentrated around Pembrey Harbour (opened in 1819 and officially deemed “disused” in 1878). Burry Port harbour opened in 1832.
Francis Randell was the master of several ships. The chief exports from Pembrey and Burry Port were coal, tinplate, copper, white lead, firebricks and steel. The chief imports were iron and copper ores and timber.

Some ships associated with Francis Randell
1821 – February. Master of the ELEANOR AND CATHERINE. This sloop was totally lost when stranded near Kidwelly on a voyage back from Newport. Crew and most of cargo saved.
1852 – 7th August – 6 shares in ROSE EMMA
1859 – 5th Feb. – 6 shares in ROSE EMMA
1860 – 7th March – 2 shares in MARGARET JANE
1865 – 13th Jan. – 56 shares in ELLEN (built 25th June 1864)
1869 – 64 shares in MARY B. Lost on Cefn Sidan 18th January 1871 with all hands.
16 shares in SILVER LIGHT.
1870 – part-owner of ROSE EMMA
During Francis’ lifetime ships continued to get bigger with a gradual change from wooden sailing ships to iron, steam powered vessels, still built with masts and the ability to sail. Coaling stations took time to get established. Charging points for electric vehicles would be a modern day equivalent.

Publican
On some public records Francis is named as a publican, on others he is named as a pilot.
1851 census – Francis’ daughter Margaret, aged 21, is named as victualler of the Commercial Arms
It is likely that his business activities, run from the Commercial, helped to establish it as a centre for financial transactions.
When the A484 was rerouted in 1929-32 the subsequent auction of the nearby vicarage was held in the Commercial Arms. Before this, the route between Llanelli and Kidwelly ran down Church Hill and through Randell Square.

Shipbuilder
Anecdotal evidence has it that Francis repaired his own ships and that the location for this shipyard was the Plantation – near the Commercial Arms and near the sea. This is supported by the fact that in 1863 Pembrey lifeboat station opened at this site, possibly drawn there by the existing shipyard. Access to the Plantation is down a lane which was named the Lloetrach in 1905 when the bridge was built over the GWR line.

Pilot
Francis I, Francis II and Francis III were all in their time licensed sea pilots. A pilot apprenticeship was for five years culminating in exams. These all had to be completed before a pilot was licensed.
Francis Randell was licensed as a pilot (no. 32) prior to 1832). He was complained about by Jno. Biddulph of the New Dock Co. for putting the SYRIA aground at the harbour entrance on10th May 1836. It is likely he was suspended as he does not appear in later lists. Francis Randle (sic) listed in 1832/3 as having had a pilot’s licence granted by the Llanelly Pilots Committee.
23rd May 1843 appointed a 1st Class Pilot, to pilot all vessels inwards and outwards above 70 tons for both Pembrey and Llanelli (or could this have been his son? Prof. Brian Randell)
1853 – 15th April and 25th December – listed as Pilot living at the Commercial Arms at the marriages of his daughters Elizabeth and Margaret respectively.

Randell Square is a testimony to the memory of Francis. It is the only Randell Square in the UK. There are descendants of the first Francis Randell living all over the world. Do they have a seafaring gene passed down to them by their Master of the Bristol Channel ancestor?

We are indebted to Brian Randell, emeritus professor of computing at Newcastle University for his invaluable help. Prof. Randell is the 3X great nephew of Francis Randell II. His 3X great grandfather, James, was Francis Randell’s brother.