For 160 years, Whiteford Lighthouse has played an important role in providing safe access to Burry Port from the open sea, marking the shoals of Whiteford Point. Apart from the dangerous shallows, tides across the Point can reach 8km per hour.

The first Whiteford Lighthouse was built on piles in 1854-55 but was unable to withstand the constant battering of the waves. The current lighthouse was designed by John Bowen (1825–1873) of Llanelli, under the Llanelli Harbour and Burry Navigation Commissioners. It is built on the “Scar”, a jagged area of broken rock left by the last ice age. It is wave-swept but stands just above low-water level. It is a cast iron cylindrical tower, with a pitched stone apron at its base. It was originally black (bitumen coated). 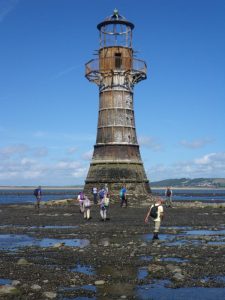 It was constructed in 1854, first lit in 1865 and automated with gas in 1919. It is 13.5 metres high and its light had a range of 7 nautical miles. It was built in elegant Victorian style, with a gallery encircling it near the top. There was an external ladder.

Three Argand lamps and reflectors were originally fitted, with the Harbour Master adding a fourth lamp in 1876, to shine west along the north channel. The Admiralty chart of 1887 shows the “Arc of Visibility” of the lights from slightly west of south, through north, to slightly south of east.

The equipment for the lighthouse is listed in an inventory of 1888 and indicates that provision was made for two lighthouse keepers, although census returns name only one keeper. The working pattern was two weeks at Whiteford Lighthouse, alternating with two weeks at Llanelli Harbour Lighthouse
The light was extinguished in 1921 by Trinity House, and replaced by the Burry Holms light. In 1982 the Burry Port Yacht Club, supported by the Llanelli Harbour Trust, fitted a new solar light on Whiteford Lighthouse. The new light was fully automatic and switched on when daylight faded to a pre-determined level. Nautical almanacs show the light as flashing every five seconds.

Whiteford Lighthouse is currently managed by Carmarthenshire County Council. It a Grade II listed building and is also a Scheduled Ancient Monument. It still has navigational value in daylight (for example, providing a line of sight when leaving Burry Port harbour to reach the main channel).
The lighthouse can be safely accessed on foot at low tide. There is a published route for ramblers to reach the lighthouse. The Scar and its surrounding sands and marshland provide sanctuary for flocks of wild fowl. Apparently, on approaching the beach, signs warn of chemical explosives. At some point, shells were fired from the Penclawdd area using the lighthouse as a landmark (not target). The shells were over a hundredweight and once littered the beach. There are reported to be wrecks of lightering barges, metallic remains of shipwrecks and sometimes remains of fishing tackle hooked up on the Scar.

There is an excellent video on Whiteford Lighthouse on You Tube, prepared by Antonia and Andy Freem in 2014 (https://www.youtube.com/watch?v=AosguL_vsgE T).

Sources:
1. Local Memories, by Terry Thomas, 2011
2. Pembrey and Burry Port, their Harbours, Shipwrecks and Looters, by John A. Nicholson
3. The Industrial and Maritime History of Llanelli and Burry Port 1750 to 2000, by RS Craig, R Protheroe Jones and MV Symons, 2002
4. You Tube (as above)