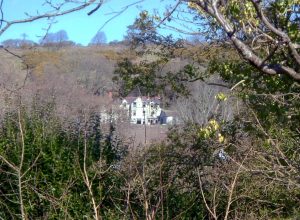 Goodig House or Plas Gwdig was a large estate that was at one time home to some of the people who influenced Burry Port and the surrounding district from the 17th to the 20th century.
The name Goodig comes from the Welsh ‘coedwig’ meaning ‘forest’. Today it is a large imposing fire damaged ruin overlooking the Burry Estuary on the A484 road into Burry Port.
For many passing motorists it was a landmark home to a herd of pigs and goats. 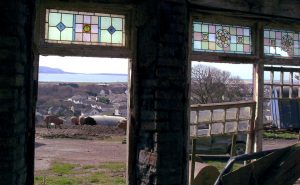 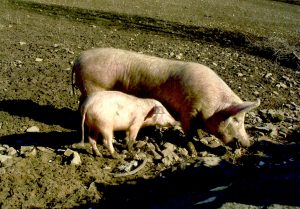 But it was not always so.  Originally it was a farm house and its origins are somewhat obscure, but earliest records show it was a farm owned by Thomas David Roger ab Owen.
When he died at the end of the 17th century the estate passed to his only child Anne of Goodig. She married Evan Price, fifth son of Griffith Price of Penllergaer and Elizabeth Llewelyn, thus linking the estates of Goodig and Penllergaer. The Price family were coal owners from Llanelli who had agreements with John Stepney (later 6th Baronet) and later Hector Rees Cilymaenllwyd (1729) to develop their adjoining coal fields. It was around this time that the house was enlarged and gentrified enough to merit a title “Plas Goodig.” There is a stone to this effect on the front wall inscribed “T.P.E. 1701”

Anne and Evan Price had a daughter Anne who inherited the Goodig estate and went on to marry John Thomas of Trecyrn Llanwinio. They had three children – Joshua (1729), John Thomas (1731) and Elizabeth (1734). Little is known of Joshua except he died sometime between 1745 and 1753. On the death of John Thomas Senior, John Thomas, his son, his wife Hannah Lewis, his widowed mother Anne Thomas and his sister Elizabeth Thomas were all living at the Goodig.

John Thomas Jnr. died in 1760. He and Hannah had no children, so the estate passed to Elizabeth’s older son John Wedge Junior, known as Captain John Wedge. Elizabeth had married John Wedge a sea captain from St Ives, Cornwall in 1783. They had two sons, the afore-mentioned John (1765) and Joshua (1776). Elizabeth died in 1787 aged 53.

Both brothers played their part in making the Burry Estuary safe for seafarers. John, who had watched from the Goodig one of his ships run aground at Barnaby Pill, was a well-respected mariner. He had drawn up an accurate “Chart of the Burry Bar and Harbour” (1808) which was given to sea captains to enable them to find their way through the treacherous sand bars and currents of the Burry. Joshua meanwhile went into partnership with John Rees of Cilymaenllwyd to arrange finance for buoys and other navigational aids to ensure greater safety for ships in the Burry.

Captain John Wedge was involved with the building of both Pembrey and Burry Port Harbours but in later life some of the Goodig estate was lost in a gamble to his neighbour Mr Pemberton. He died in 1853 aged 88 years.

His surviving daughter Anne Rachel Wedge inherited the Goodig and in1856 she married John Kenneth Hand. The couple decided to live at Glyn Ifor and it was here in 1881 that John Hand died.
During the latter part of the 19th century the house was home to different families. In 1866 Mr George Knowles was living at the Goodig, and records show that in 1871 Howard Elkington’s wife gave birth there to their fourth child Ernest Howard Armstrong Elkington.
John Lefeaux and his family, a copper smelter from Swansea were living at the house in 1881.
John Gwillim Thomas, a mining engineer, came to Burry Port to take up the colliery manager’s position with Mason and Elkington and he was living at the Goodig in 1890 before moving to Glyn Ivor, the old home of Rachel Hand.

On the death of Rachel Hand in 1893 the Goodig estate passed to her nearest surviving relative Maria Roderick, nee Buckley. Through Joshua Wedge Maria was the great granddaughter of Elizabeth Thomas and John Wedge Senior. Maria known as Ella married William Buckley Roderick (1862-1901) and the couple moved to the Goodig. William Buckley Roderick was a polymath: Captain in the Welsh Guards, an international rugby player, solicitor and co-director of many local businesses including the Mynddydd Mawr Railway. In 1897 he was appointed Vice Consular for Spain. But his great interest and passion was the Territorial Army. The Dean of St David’s said at his funeral oration:
“Like his grandfather James Buckley he was a remarkable character, uniting many interests. As solicitor, registrar and coroner, his decisions were considered a masterpiece.
As an agriculturalist, his Jersey herd of cattle were world famous. In his youth he was an international football player, a gold medallist. But his passion was volunteering , carrying on the work his father had begun, winning valuable concessions from the War Office that set the new Territorial Army on a fine basis so, that when the Great War began Llanelly was foremost in rallying men to the flag.”

The tragedy was that when the Great War came Ella and William lost three sons in the carnage.
When Ella and William moved to the Goodig they made many improvements to the house and gardens and it was here that William died in 1901 aged 46. 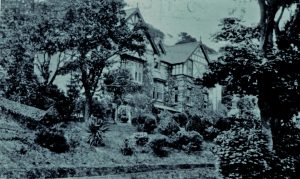 In 1901 Ella was living at the Goodig with her four daughters, Marian Francis, Flora Elizabeth, Jessie Muriel and Edith Margery. The couple also had four sons: Hume Buckley Roderick, Alan Whitlock Nicholl Roderick, John Victor Tweed Roderick who were killed in the Great War, and William Buckley William Roderick who survived the conflict.

The family sold Goodig House in 1918 and its next occupants were Joseph and Charlotte Rolfe and their daughter Gladwys. Rolfe was a partner in the ship owning and ship brokers firm Stone and Rolfe based in Burry Port, Llanelli and Swansea.
Joseph Rolfe (1878) came from a family who owned Morlais Colliery, Llangennech.

Stone and Rolfe was a successful company, owning many ships. Perhaps the most famous was the Sarastone, a Welsh collier, whose Captain Herbert attacked and crippled an Italian submarine, the Mocenigo, even though one of her own boilers was not working. Another of his

ships he named after his house, The Goodig. 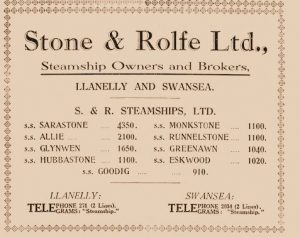 Joseph Rolfe had an extension added to the house from where he could watch his ships progress up the Burry Estuary. They were easily identifiable by their black funnels with a red stripe. picture
The 1939 Register shows Joseph Rolfe, his wife Charlotte, still living at the Goodig. Joseph Rolfe died in 1959 and he and his family were the last to live there as a well to do middle class family would have done in Victorian and Edwardian times.

A surprise find was made when in 1941 a coal seam titled The Goodig or Clay Seam was rediscovered, having got its name by outcropping across Goodig land. It was a narrow seam being only some 12 inches thick. It was exploited along with a bed of fireclay throughout the war years.

The Goodig lay forlorn and empty for some years until in the 1960s it was turned into a hotel. Where to stay Guide Wales 1973 advertises rooms at the Goodig Hotel with spectacular views overlooking the Gower. It had 17 rooms and one could stay there from £2.50 to £5.00 per night.

The Goodig became a social centre for the people of Burry Port. It was a popular venue and many recall having met their future partners there. The Goodig boasted a large ballroom and a restaurant, both of which hosted dinner dances, weddings and other local functions. Later a disco was introduced for teenagers on Wednesday evenings. 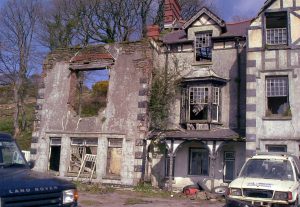 A devastating fire engulfed the Goodig on the night of April 7th 1983 and this event turned out to be the death knell for the beautiful old mansion whose wooden panelling, stained glass windows and sweeping oak staircase had once been so admired.