THE STORY OF THE SOS (Save our Sands) CAMPAIGN

Imagine living in Pembrey and hearing explosions throughout the day, and huge ones every seven minutes for five days a week from 8am until 4pm, and some late in the evening This is what was about to happen in Pembrey in 1969.

Between 1969-71 there was a great land battle fought on behalf of the people, the biggest land battle since the Normans captured Kidwelli in the Middle Ages. However, most people under the age of 55 years of age know little if anything about it. Had we lost that fight, every one of us would be experiencing a very different area to the one in which we live in today.

Because of the expansion of London to have a third airport it had been decided, without any consultation, to relocate Shoeburyness experimental gunnery range to Cefn Sidan. The Ministry of Defence wanted to make the biggest land grab ever. They were going to buy up all the land, properties and farms from Pembrey Ashburnham golf club to Kidwelli and all the land south of the Railway track – 15,000 acres. The potential damage envisaged to properties from continual explosions

along this area alone was unthinkable.

They began to bulldoze roads through the forestry in order to erect huge gun emplacements at intervals that could fire shells out to sea. The beaches were to be sealed off and become a permanent no-go area. There would be no marine leisure pursuits from Pembrey to Tenby. As far as the Ministry of defence was concerned it was a fait accompli – there was nothing anyone could do.

SOS (Save Our Sands) was set up in order to oppose these plans. This group agreed to set aside all their political differences and work as one to fight a common enemy and prevent our way of life being permanently destroyed. Soon other opposition groups formed. This was on par with to a medieval call to arms of those prepared to defend their lands.

In 1969 it was the women who first shocked the MOD by lying down in front of the army vehicles to prevent their access. Then it was the children of the schools who took on the task of raising funds by their sponsored walk from Carmarthen to Burry Port through the sleet and snow to raise £200. 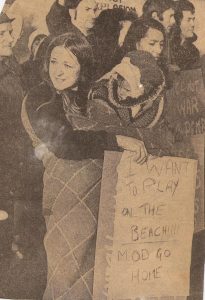 Many schools held painting competitions and designed banners for the walk and a 27,000 name petition was handed in to the Welsh Office in Cardiff. There were parades of donkeys that held up traffic and the Secretary of State for Wales was mobbed by crowds of women in Llanelli’s new market. Women, including the mayor of Kidwelli, were dragged unceremoniously from under the army trucks.

When the MOD began to bulldoze paths through the forestry and erect red and white posts to mark out roads for the guns, a guerrilla raid led by the men of Pembrey pulled up all of the posts one night. Suddenly men in dark raincoats and slouch hats began to appear in the area and fancy cars, completely out of keeping with the area, seemed to park ever such a long time in Ashburnham Rd. Phones were tapped and, during demonstrations, we were photographed by secret police – all because we wanted to protect our beach. There were even pirate broadcasters at the end of TV transmission explaining the predicament.

It eventually came to a public enquiry and we had hired the very best barristers to represent us, paid for from the fundraising of ordinary people who understood what devastation would have occurred had we lost – no access to the beach, no country park, no tourist economy.

We won against all the odds because the ordinary people of this area fought to protect this wonderful coastal landscape. We think this is the only occasion in history where the crown lost a public enquiry. The current ‘SOS 50’ was formed to with the intention of educating, celebrating and commemorating these important historical events.