The need for a big power station in South Wales came about following the end of World War II and the increase demand for electricity in the surrounding area. The Carmarthen Bay Power Station Co. Ltd. was set up to build a large power station in Burry Port due to suitable rock foundation, plentiful supply of sea water for cooling purposes, plentiful supply of coal from the Gwendraeth Valley and a local work force.

Work began on the cutting of the first sod in 1947 by Councillor F.J. Morgan of Burry Port Urban District Council with the support of local people and school children. Building work began with the clatter of the “pile drivers” and the building of the three large Boiler Houses, associated Turbine Room and Control Room. The vast building was a local landmark and was soon for miles around. It took 11,500,000 bricks and was reportedly to be the largest brick built building in Wales, and in size and general appearance looked like Battersea Power Station in London. 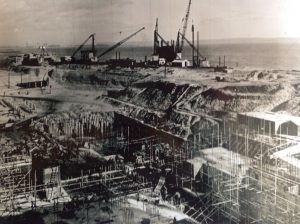 The 15 boilers were built by Balfour Beatty and the six turbines by Metropolitan Vickers. So vast was the construction of the power station that the logistics of transporting the large turbines from Manchester to Burry Port necessitated one side of a street in Brecon being demolished to enable the huge heavy vehicles to come through the mid Wales town. 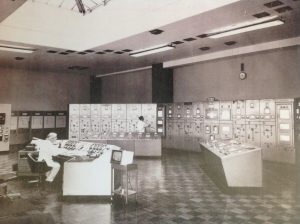 When fully commissioned the six turbines were able to generate 345 Megawatts of electricity which would comfortably supply the surrounding area to include Carmarthen and Swansea. When at its peak efficiency it would run 24 hours a day and in the latter days it would only run at peak demand times. When running 24 hours a day staff would regularly accumulate 108 hours pay per week. 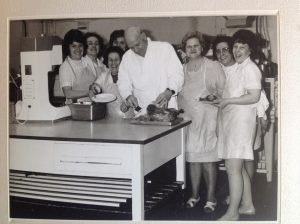 highlight was the annual Open Day. People would come from far and wide to join in the fun of the Open Days which included train rides in the GWR guards van along the 10 miles of track within the site. Another popular attraction were the go-cart races around the main perimeter road. The power station was so community orientated that the canteen provided the meals for the Pembrey and Burry Port “meals on wheels” service. The main canteen would annually provide space for those that were prepared to be blood donors, and support Give blood. 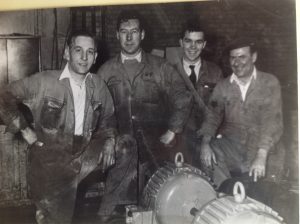 Emyr is second from right. Note the tie!

The power station was only designed to last for some 25 years but the end came after 30 years 4 months and 3 days! The announcement was made in the canteen that a closure date had been set and all the staff were assured an alternative job in the power industry, or 12 months financial support if a new career was envisaged.

The power satiation was often referred to as “Car Bay” or “The Bay” but sometimes the full title Carmarthen Bay. This often resulted in confusion with the Carmarthen Bay Holiday Village being so close in Kidwelly!