He was born in Richmond, Surrey in 1827 and probably, given his later career, to a reasonably well-off family.

In February 1864 at the age of 37 he was appointed as Secretary of both the Kidwelly and Llanelly Canal and Tramway Co. and the Burry Port Harbour Co. at a combined annual salary of £200. Later the same year he married Ada Rogers who was 13 years his junior.

In response to the rapid development and expansion of the railway network the two companies were incorporated by an Act of Parliament and combined to form the Burry Port & Gwendrae Valley Railway (BP&GVR) in July 1865. In the early days of the company, Mr.Russell’s relatives and friends were the almost exclusive owners of the company. Ultimately he was the last survivor of the founding members.

Concurrent with his appointment as Secretary of the new company, a post he held until his death, Mr.Russell was one of the chief clerks in the National Debt Office, a post he held for some 40 years.

The family resided at Halliford Green, Shepperton, Surrey. By 1881 his household consisted of a wife, three daughters and two sons along with a French born Governess, a Nurse, a Parlourmaid and two Housemaids.

When the BP&GVR was placed in receivership in July 1881 Mr. Russell was appointed as Official Receiver and General Manager taking over the management of the company from the Directors and running the company from offices in Westminster whilst apparently maintaining his Civil Service career. Thus from a relatively sheltered position of taking orders from a Board of Directors answerable to shareholders, as Receiver he had to make all the decisions on his own, subject only to severe monetary constraints. He had, in effect, become an industrialist and employer, operating a service business.

As Receiver it was necessary to maintain the business as a “going concern” whilst making sufficient profit to pay off all the company debts. Thus he was often in dispute with colliery owners over cartage and shipping rates. He received little guidance in all these matters other than from Chancery officials who repeatedly refused to let him spend any more than the amount earned.

During the period of receivership whilst he maintained the business as a “going concern” he also directed his energies to the completion of two major projects :-
1). to complete the railway line to Cwmmawr; 1886.
2). the construction and completion of the West Dock at Burry Port in order to accommodate larger ships; 1888.

In 1887 he also became Harbourmaster at Burry Port following the death of Captain John Luckraft (RN retired) who had been a Superintendent of the BP&GVR for many years.

At some point in the mid to late 1880’s he resided in Burry Port at No.8 Dock Terrace on the west side of the harbour with one daughter, one son, a housekeeper and one other servant. This move was necessitated by the business needs of the company. At this juncture he relinquished his position in the National Debt Office. However he retained the family home in Halliford Green where his wife, one daughter and one son lived with two servants.

He continued to be active in the local community. The Reading Room and Club close to the Neptune Hotel was paid for by local employers of labour and many of Mr.Russell’s business friends.

He died at his home in Halliford-on-Thames whilst on a business trip on 22nd.December 1898 at the age of 71. He was buried in the cemetery of St.James’ Church, Weybridge. 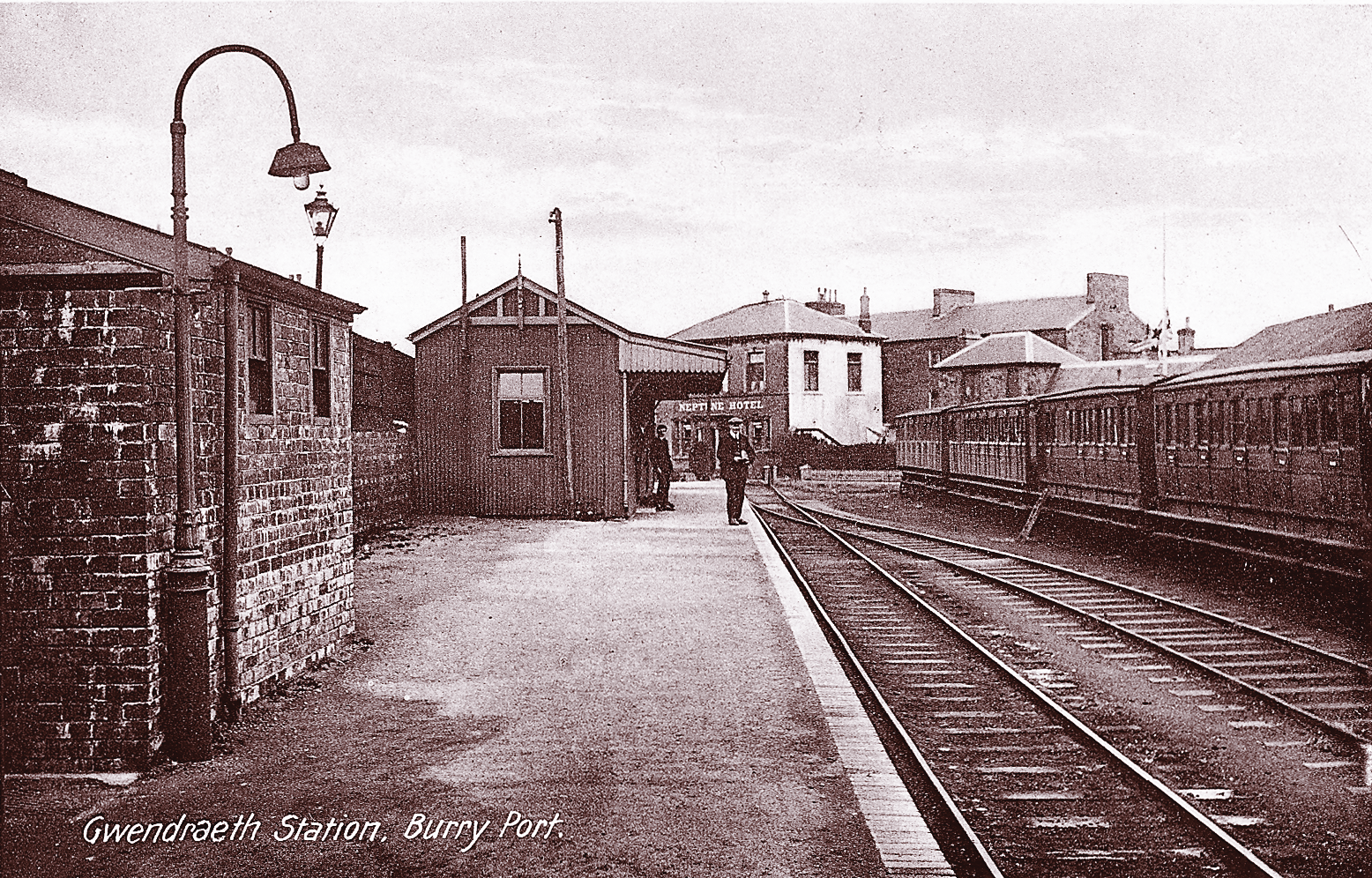 He was born in west London on 11th.October 1868. His parents were both prominent members of the Pre-Raphaelite Brotherhood and he was distantly related to Charles Darwin. Despite the artistic family environment he became interested in railways.

Between 1888/90, again using family influence, he became the Assistant Engineer on the Cranbrook and Paddock Wood Railway. In 1894 he became an associate member of the Institute of Civil Engineers which allowed him to design and build railways in his own right. These were permitted under the 1896 Light Railways Act.

Between 1895/1900 he was an Acting Inspector at the Railway Department of the Board of Trade.

He was active in the Territorial Army and during the first years of the 1st.World War was the Commanding Officer of 5 companies of Royal Engineers in Kent charged with the defence of the Thames and Medway estuaries.

During his lifetime he was engaged in engineering, building and later managing 16 Light Railways in England and Wales. These were in peripheral areas of the country mostly serving specific purposes and could be operated with relaxed construction and operational standards.

In 1908 he was employed as a Consultant by the BP&GVR to reconstruct and improve the infrastructure of the whole railway to cope with a significant increase in freight traffic and to legalise its unofficial carrying of passengers. The reconstruction/refurbishment involved the use of heavier rails, ‘new’ second-hand and modified equipment both locomotives and passenger coaches, signalling equipment, and the construction, on very simple lines, of stations and halts.

After 1913 he had no further connection with the railway. He was thus influential through the Board of Directors in the appearance and economic viability of the railway at its peak.