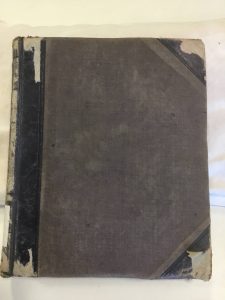 Built by Elkington and Mason, owners of the Pembrey Copper Works, the school was opened in 1855  by Josiah Mason and was one of the many schools built in the 18th and 19th centuries for children of industrial workers. It was well staffed and the buildings were, relatively speaking, in good condition although cramped. Most of the headteachers were certificated and pupil teachers and monitors trained. It no doubt also received grants from other patrons and societies (although it was non-denominational) and in addition a “poundage” educational tax was levied on the teachers in the first few decades of its existence. Although at first they were exempt, children of the Copper Works employees paid the school pence (2d for boys and girls and 1d for infants) until 1891.

The log books of the school are, at the time of writing, temporarily stored in the Glamorgan Archives, Cardiff. We were able to examine entries for the boys, girls and infant schools. The handwriting, normally that of the headteacher, in some of the early entries was quite difficult to read and sometimes illegible. The log of the boys’ school was much fuller in content. In 1872 a new code of regulations demanded that the Principal Teacher must at least once a week enter a statement of progress, withdrawals, commencements, illness, cautions. Inspectors will inspect the log book at every visit.

We have not conducted a systematic research of the log books (not all were available) but after a day’s reading the following information was extracted.

Below are some of the main features of the Boys and Girls schools: 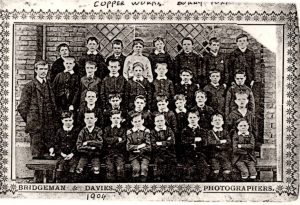 The infant log book started in 1876 and here are some of the key features:

Overall the verdict on the Copper Works Infant School was a positive one.  On the whole the children were well “instructed” and the school buildings for their   time were good and the school was well resourced. There were a few qualified teachers at the school and there was provision for assistant teachers and pupil teachers to have further training.