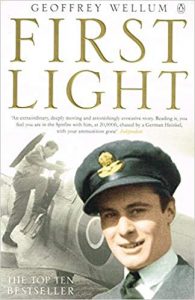 school, at the age of 17, wrote to the Air Ministry saying he wanted to fly,
and that joining the RAF was the cheapest way of doing so. This sort of
attitude earned him the nickname in the RAF of  ‘Boy’ , and he was known to his Commanding Officer in 92 Squadron as ‘ a cheeky  young
cocky little bugger’. He could not join until he had reached 171/2 , and after  completing his schooling, was accepted and posted to Desford, just west of Leicester. He learned to fly on Tiger Moths, which included cross-country navigation and aerobatics, but he had great difficulty in keeping the plane straight on take-off, and didn’t seem able to land smoothly. Things started to improve when he was allowed to go solo, which he did with a faultless circuit. The problem had been ‘tension’, when his instructor was sitting in front. 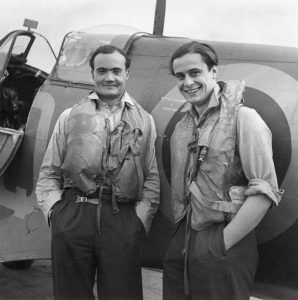 Geoffrey Wellum is on the right Copywrite Wikimedia Commons

Two days later Britain was at war: September 3rd 1939. Geoffrey’s flying instruction continued as well as ground studies and examinations and further flying tests. More than half of Geoffrey’s intake did not make it to the end. After two weeks of basic training (lectures, uniforms,square bashing) Geoffrey and his colleagues were sent to Little Rissington, near Stow-on-the-Wold, to a Flying Training School, flying the Harvard advance trainer from the US. Britain did not have this type of training aircraft.
However, the Harvard was a difficult little beast to fly especially for inexperienced pilots, and some of Geoffrey’s colleagues were killed in training.  Because of its short length and powerful engine it was necessary to synchronise full rudder when opening the throttle on take-off and a couple were killed in this way. Another tricky procedure came with the stall, which the Harvard was prone to do: if  the aircraft is falling and spinning and how do you recover? Geoffrey concluded that if you can fly the Harvard, you can fly anything.  In January 1940, after soloing in the Harvard, Geoffrey did  his first night flights, accompanied , and then solo. By June he had completed his Harvard training, and was posted to 92 Squadron. And then there was Dunkirk. Churchill vows to ‘fight on’.

By this stage Geoffrey is 183/4 (to be exact) and has flown for 168 hours, 95 solo. 92 Squadron was  a front-line squadron, based at Northolt, west of London, and although Geoffrey was one of the best of his cohort of trainee pilots, his CO was shocked at having to take him and one other with no combat experience or Spitfire experience. The following day, the squadron went to war over Dunkirk, but Geoffrey was too  inexperienced to be involved and was assigned to office duties, to prepare for the squadron’s  move from Northolt to Duxford.

At Duxford he was given his first taste of flying a Spitfire
– it had to be solo right from the start as it is just a single-seater. For a moment he feels that this powerful aircraft is flying him, rather than the other way round. The acceleration was unlike anything he had ever experienced,
a thoroughbred of an aircraft, racing into the sky, and on this first sortie he was out for an hour and reached  400 mph while executing a dive. The problem with the Spit is that the engine on take-off and landing is pointing in the air and completely obscures the pilot’s view ahead. Taxiing is done by swinging from side to side: landing is by watching the grass go scudding by alongside! He was still not ‘operational’ but practised whenever a Spitfire became available.

After a short while the squadron moved to Pembrey, in a Flight of 12 aircraft. It was the first time Geoffrey had flown in formation, and it was a wonderful feeling. “Pembrey airfield is a mile from a long sandy beach.
It is magnificent and the sand is hard and we take our cars on it. The weather is glorious day after day. One Flight is always on readiness from dawn to dusk, but you wouldn’t know there is a war on”. Occasionally there would be a chase after an isolated ‘plot’ and on one occasion Geoffrey chased a Junkers down to
Weymouth.

The squadron started training for night flying in the hope of intercepting night raids on Bristol or the West Midlands. At night the flames from the engine exhaust would make visibility almost impossible, so
blinkers were attached to the ports, restricting forward visibility even more. In training Geoffrey had to make three landings and take-offs in darkness.
Unfortunately, on one evening, he misjudged his turn on approach – because of the loss of forward vision due to the nose coming up – he lost his alignment with the runway lights, which he had to carry in his head for the final landing. Geoffrey hit the runway lights, damaged a wing and was ‘grounded’ for
two weeks, during which time the aircraft was repaired.  He learned from his mistake – at night the
pilot must make a much tighter turn from the circuit.

After he was released from his ‘punishment’ he took his repaired aircraft for an air test – he flew up to 10,000 feet and continued  to St Govan’s Head and Milford Haven in Pembrokeshire. He flew out into the west at sunset into a copper-coloured sea and after a while he turned through 180 degrees to return to Pembrey. Gower was to the right looking as beautiful as ever. Dropping down to 4,000 feet he felt
he needed to prove to himself that he has not lost his touch due to the crash,
and he performed some aerobatics:  one slow roll, then two more, a roll off the top, and then two upward rolls when he had enough speed up. The Spitfire responded brilliantly. To finish he did a
slow roll on to his back before coming round to do a ‘night’ landing.  Little did he know that his CO was watching, and complimented his impromptu display.

On another evening of night landing practice, just as he is about to come in he had a call from  the
Controller to chase towards Bristol where there had been a bombing raid. It was getting dark rapidly and he had difficulty seeing anything, but messages kept coming on the R/T from the Controller, reading from his radar screen, saying that a solitary ‘hun’ was just ahead.  After searching for half an hour south of Bristol Geoffrey was told to return to Pembrey, as by this time his fuel reserve was very low.

After more periods of inaction, the squadron heard a rumour that they would be moving up to London to relieve one of the squadrons there. This was August 1940. With a day’s notice, the squadron did indeed move to Biggin Hill, and what  a sight greeted Geoffrey – broken aircraft dotted around, bombed buildings, filled-in bomb craters – but the fighters still flew and the station was fully operational.  A new routine began:  a nudge awake at 4 am with a cup of tea, then to be at dispersal at 4.30. It was now September 1940. His first sortie was with a Flight of ten Spitfires, on one of the heaviest days in action against 150 aircraft, bombers and escorts, and he managed to bag two. So the routine continued: land, refuel , rearm and stand by for the next call. Relentlessly, day in day out, learning on a daily basis the tactics needed for survival. There were experiences of being chased when out of ammunition, going too far on a chase and getting lost, getting lost in cloud, being shot at, but always the faithful Spitfire responded. By the end of September the Luftwaffe no longer came in force: the losses by this time were so great. The battle for air supremacy had been won by the Spitfire and Hurricane.

When the Luftwaffe changed tactics, with their fighters making sporadic attacks carrying bombs, Geoffrey’s squadrons’  role was in ‘patrol lines’. Then in January 1941 the buzz was all about daylight raids into Germany, and Geoffrey was now on close escort bomber protection duty, with long, slow, frustrating and
dangerous  sorties into France . That summer he was awarded the  Distinguished Flying Cross, and by September 1941 he had been on the squadron longer than anyone, and he was very tired, not to say exhausted. This had been noted by his CO, and he was taken off ops and transferred to an Operational Training Unit, where he would remain  until the call for ‘Operation Pedestal’.