The Wedge Family of Goodig

The Wedges were a sea-faring family from St Ives, Cornwall.  Elizabeth Thomas married John Wedge in 1763 and they had two sons, John Wedge Junior (1765) and Joshua Thomas Wedge (1776).  On the death of his uncle John Thomas (1791), John Wedge inherited the Goodig a substantial house and estate overlooking the Burry estuary at Burry Port.

John Wedge junior became known as Captain John Wedg. He married his housekeeper Jane and they had four children, of which only his third daughter Anne Rachel survived him.  He was described by fellow mariners and business associates as being “a kindly man”, a devout Christian, yet he is reputed to have gambled part of his estate to Col. Pemberton.

He was a well-respected sea captain and owned ships that traded from the Burry Estuary. He once wrote to his father describing an accident that happened to one of his ships as it was trying to dock in the Burry, most likely at Barnaby Pill, a landing stage on the eastern edge of Burry Port.

As John Wedge had good local knowledge of the Burry, in 1805 he was commissioned by local landowners and industrialists to produce an accurate plan of the estuary.  This highly regarded chart known as “A Chart of the Burry Bar & Harbour (Llanelly)” was published in 1808 and was still in use well into the 19th century.
The chart was distributed to ship masters allowing their ships to safely navigate the treacherous currents and shifting sand bars of the estuary.  In 1814 he published “A Chart & Description of Kidwelly Harbour”.

Increased demand for coal at the beginning of the 1800s necessitated the need to improve and increase coal exports. Pembrey Harbour was  proving inadequate and silting was a problem. John Rennie Esq., one of the top engineers of the day, had been called in to offer advice and the idea of a new harbour was put before Captain John Wedge, since he was an experienced expert in the field who had charted the estuary and knew of all the inconsistent channels. He, along with other sea captains, stated that it could not be done. Pressure from the new industries of copper and lead as well as coal mining meant more capacity was urgently needed. Pressure from businessmen like George Bowser meant that the new harbour went ahead.

A company was formed on 10th June 1825 –The New Pembrey Harbour Co.  The construction would be under the leadership of Sir Edward Banks who was an associate of both Rennie and Captain John Wedge. 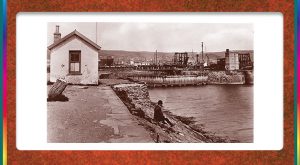 In April 1832  the new Pembrey Harbour (Burry Port Harbour) was certified and ready to receive ships, but  despite employing the best engineers and taking expert advice the harbour walls collapsed.  The harbour was reopened in 1836 under the new direction of James Green. Captain John Wedge died in 1853 aged 88 and is buried in the family tomb in Pembrey Churchyard. 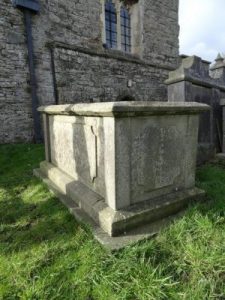 The tomb of John Wedge in Pembrey      Churchyard

Prominent People in and around Llanelli, William and Benita Afan Rees, Meiros Publications, 2015

Homes of Historic Interest in and around Llanelli, William and Benita Afan Rees, Meiros Publications, 2011